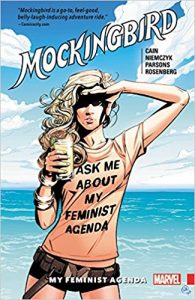 With “Ask Me About My Feminist Agenda” emblazoned across her t-shirt, Mockingbird is back with a message to the haters, who are clearly focusing too much on the feminist side of things rather than the great storytelling by Chelsea Cain. Bobbi’s wearing that shirt as a threat and she can kick your ass. Be warned.

While her ex-husband Hawkeye is facing a jail sentence for the murder of Bruce Banner, Bobbi gets an invite from a mysterious stranger to a tropical cruise aboard the Diamond Porpoise along with some information that could sway the jury and free Hawkeye.  What they failed to mention is that it’s also a floating comic con and Bobbi is soon surrounded by people, dressed up as the people she’s trying to avoid and there’s a murder to solve too. Too add to her ever evolving list of problems, the ridiculously named Diamond Porpoise is heading towards the Bermuda Triangle. Mockingbird has to solve a murder, find evidence to acquit her ex-husband and stop her ship from disappearing into the abyss, all while dealing with Marvel fan boys and drinking the free chardonnay.   Bobbi’s interaction with the cosplay crowd makes for funny reading and the plot soon descends into Cluedo territory as Mockingbird does her Jessica Fletcher bit.

This is an excellent continuation of this series. The whole “t-shirt thing” has caused a bit of a scandal, which is a shame as there is nothing present here that wasn’t in the first issue. Mockingbird is everything you could want in a comic character, emotion, humour and depth, not to mention a kick ass writer in Chelsea Cain, who unfortunately has walked away from this series after eight issues (the last of which are collected here in My Feminsit Agenda) due to the abuse she suffered from individuals objecting to its feminist themes. What’s wrong with people?  Whoever follows Cain has some mighty big shoes to fill… Chris Andrews