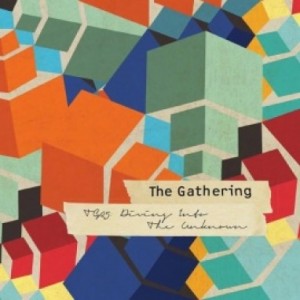 The Gathering – TG25: Diving Into The Unknown (Psychonaut)
When The Gathering hit the scene in 1989 with their debut ‘Always’ I was immediately hooked. At that time this young band was a death metal band with gothic / orchestral tendencies, but you could sense that something was brewing. Their second album ‘Almost A Dance’ already showed a different, more melodic direction, but all the hard work really paid off when Anneke Van Giersbergen stepped in, and the band released their groundbreaking third album ‘Mandylion’. From that point onwards the band released one hit record after another. Now it’s 2014, The Gathering is celebrating their 25th anniversary with a three disc deluxe release, which could also have been called ‘The Anneke Years’. The first two records are only featured with one song each, for obvious reasons, and after Anneke left in 2007 the band has only released two albums with original songs, sung by Silje Wergeland. So songs with Silje or other vocalists are few and far between. Personally I don’t really mind as I love Anneke’s voice, the way she brings the melodies displaying both melancholia and intelligence. All 26 songs prove that The Gathering is a very original and influential band, and it’s amazing how all songs seem to belong together. The quality in both songwriting and production of all songs is on a consistently high level. Is this particular release also interesting for the rabid Gathering collectors? It sure is….As a bonus you get a 13 track live recording from a show in 2004, which just sounds amazing. Martijn Welzen