Warning: preg_match() expects parameter 2 to be string, object given in /var/www/vip4/sites/vip6102689/httpd/htdocs/wp-includes/formatting.php on line 4866
 Convict – Burn The Flags - Mass Movement
x
Spread the love 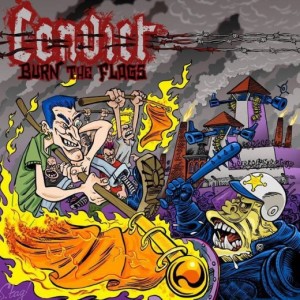 Convict – Burn The Flags (Strength)
Belgium’s answer to Ignite strikes back…. hard! 10 anthemic songs that bring the riots to the streets, simply because change is needed. The people have suffered long enough and have finally been given the right songs to fuel their demands for the said revolution. These tracks are among the best melodic hardcore songs this band, or any other similar band has produced. Even though the Ignite / H2O banner is still flying high, ‘Burn The Flags’ is fiercer, almost like Pennywise. It makes this whole band sound more mature and angrier. It’s been quite a while, eight years to be precise, since Convict’s previous release, so musical and personal growth had to be expected. Pure anger has driven Convict to make ‘Burn The Flags’ their hardest and most diverse album to date. Martijn Welzen