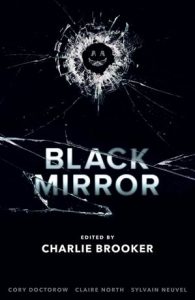 And today Penguin Random House is delighted to reveal the authors of the first volume of Black Mirror fiction.

Edited by Charlie Brooker, the three-volume series of original fiction will feature novella-length stories from leading names within the literary world.  The first volume, published in February 2018, will be authored by: New York Times bestseller CORY DOCTOROW, Carnegie-nominated CLAIRE NORTH and SYLVAIN NEUVEL, author of Sleeping Giants.  Each author will provide their own all-original story in the style of the show, with soon to be revealed plotlines.

Speaking after the announcement of the collection, Black Mirror creator Charlie Brooker said: ‘All-new Black Mirror stories from exciting authors – that’s a joyous prospect. And they’re appearing in a high-tech new format known as a “book”. Apparently you just have to glance at some sort of ‘ink code’ printed on paper and images and sounds magically appear in your head, enacting the story. Sounds far-fetched to me, but we’ll see.’

Black Mirror is an addictive anthology series that uses science fiction tropes to make trenchant and unsettling commentary on the convergence between humanity and technology, and a promised future. Season one and two originally aired on Channel 4 between 2011 and 2014. In September 2015, Netflix commissioned a third season and the worldwide release in October 2016 led to further international critical acclaim including two Emmy Awards in September 2017. The heavily anticipated next Netflix season will be coming later this year.

The first original fiction volume will be published in February 2018, with the second volume scheduled for autumn 2018 and the third in 2019.