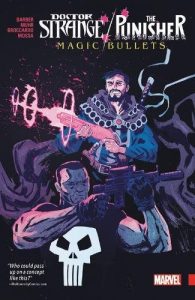 In the whole massive melting pot of the Marvel Universe,right at the top of the charts that most of us would vote least likely to team up in order to confront and take on the forces of darkness would probably be Doctor Strange and the Punisher. Diametrically opposed in almost every aspect of how they see their roles, I never imagined that I’d see the day when Stephen Strange and Frank Castle stood back to back, laying the smack down on, and protecting New York from, an invasive force of extra-dimensional horrors controlled by a neo-nazi wizard obsessed with vengeance and racial purity. But I’m all sorts of happy that John Barber and Jason Muhr came up with the fevered, lunatic idea for this book and made it happen, because not only is it as crazy as the guest speakers at a Flat Earth Society conference it’s also more fun as a coffee fuelled Star Wars marathon. Yeah, it really is that good.

While the story isn’t exactly complicated, Frank and Stephen fighting Mafioso possessed, and made more powerful by, demons from the realms beyond at the behest of an alt-right sorcerer determined to stamp his mark on the world, the interaction between the characters, the wisecracking and at times darkly humorous dialogue, capricious amounts of violence and our heroes being aided by a haunted First World Bi-Plane ensure that Magic Bullets remains on point and is never less than hugely entertaining from the first panel to the last. And the character swerve and role reversal when the finer details of the whack-job and his “associates” scheme become apparent to the odd couple team fighting to save their city adds an extra dose of “I didn’t see that coming” to a tale that delights in stamping all over and jumping up and down on its audiences expectations and preconceived ideas.  Aided and abetted in bringing their vision to life by the quick jab, lightning fast, superbly detailed and oddly cartoonish art of Broccardo and Stanton, Barber and Muhr’s story proves that even though opposites don’t necessarily attract, they really do work well together and that all you need to make sure they do is imagination, creativity and a whole of wonderful insanity.  Frank and Stephen, sitting in a tree… Tim Cundle