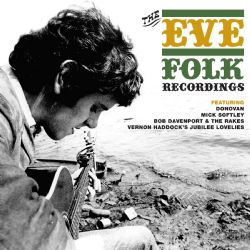 The Eve Folk Recordings – Various Artists (RPM Records)
British folk music exploded in 1965 with our first artist on this 2 CD offering, Donovan, probably the most widely known of the 4 artists.
The recordings were the mastermind of Geoff Stephens and Peter Eden who got the opportunity to produce a series of 4 albums, for release on EMI, by other artists of their choosing from the folk underground. Donovan was banded around as the British Dylan but there are only four songs on here with each one as good as the last with “Colours” being the best.
Next up we have Mick Softley who Donovan introduced to Geoff and Peter. all of his songs are from his debut album “Songs For Swingin’ Survivors”. I love the anti war song “The War Drags On” which is about the US involvement in Vietnam (which Donovan also covers on here. His guitar work is second to none with lots of finger picking and great tunes with each song having it’s own identity. Having not heard Mick Softley before, I must say that I like what I hear and the final song ”She’s My Girl” must have been where Ed Sheeran got inspiration from.
Moving on to disc 2 we start with Bob Davenport & The Rakes and these have a more Irish feel to them, Bob was already a respected folk artist with fans like Pete Seeger and Bob Dylan, with this old England sound it has sea shanties fiddles, accordions and penny whistles, I can imagine sitting around a log fire in a remote pub, snowing outside, real ales and watching Bob Davenport in the corner. Lastly we have Vernon Haddock’s Jubilee Lovelies which has a hint of George Formby about it and a sound that lives up to what you might expect from their 20’s style name.
It also comes with a booklet which is a great insight on the folk scene in Britain written by Colin Harper including short interviews with Eden and Stephens. Paul Hoddy