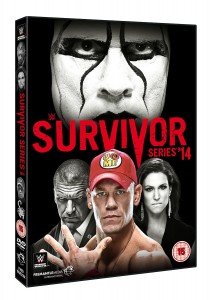 WWE SURVIVOR SERIES 2014 (WWE DVD)
Even if nothing else had happened on the three hour card of Survivor Series 2014, the fact that the end of the show marks the first ever appearance in a WWE ring of WCW and TNA icon, Sting, makes this, the twenty-eighth edition of Survivor Series, monumental in the annals of professional wrestling.  Happily, the debut of Sting is not the only thing of worth on this new release, and the shocking appearance of “The Vigilante” is merely icing on the cake of a thoroughly enjoyable PPV.
The main event which precedes Sting’s entrance is a carefully booked and highly impactful ten main elimination tag match, backed by a compelling story to make the outcome important: if Team Cena wins, it will mark the end of the hated Authority, and Triple H and Stephanie McMahon will be relegated to desk jobs back in Stamford.  However, if Team Authority wins, then Cena will have to watch as his tag-team partners Ryback, Dolph Ziggler, Eric Rowan, and The Big Show get fired.  The high stakes and import put the crowd in an excellent mood, making every near fall and every elimination feel huge.  Triple H and Stephanie McMahon’s reactions on the outside, as they see their chances fade or feel success in their grip are priceless, and add to the overall excitement.
The main event is what Survivor Series is all about.  Traditionally, the entire three hours was taken up with these elimination-style matches, and then we got to a point where WWE seemed ready to drop them, and the event, completely.  Now they seem to be rehabilitated, and the event works best, as it does this year, when there is one main event elimination match that means something for all concerned.

As well as boasting the first glimpses of Sting, and the Scorpion Death Drop that we all assume sets up a Triple H/Sting match at Wrestlemania 31, the elimination match boasts some standout performances by Dolph Ziggler and Seth Rollins, as well as various shenanigans with The Big Show and J & J Security (even a cameo from “evil referee”, Scott Armstrong), making the three quarters of an hour the match lasts entertaining from first bell to the last.

Survivor Series 2014 also features a thrilling Fatal Four Way for Gold and Star Dust’s tag team championship (possibly the last ever time Los Matadores were relevant in a WWE ring?), with some great dives from The Usos and Cody Rhodes, and great fun from Damien Mizdow in his break-out role as The Miz’s “stunt double”.  There is also a fairly decent Divas elimination-Survivor Series style match, between the stars of Total Divas (ending with a brutal headscissors DDT!)  The semi-main event, however, between Bray Wyatt and Dean Ambrose, gives even the actual main event a run for its money, with a high octane and high intensity war between two of the hottest young stars in the company.  Every pay-per-view match Dean Ambrose had in 2014 felt like we were watching the future of WWE evolve before our very eyes, and this match marked the first PPV encounter between the Lunatic Fringe and The Eater of Worlds (the next, a few years from now, could very easily be a Wrestlemania main event ).  It’s only drawback was the clunky supporting storyline, implicating some unbelievable backstory about Ambrose’s father, and the disappointing ending which, though a compelling piece of furniture-assisted violence, was all too predictable as a precursor to a re-match at December’s Tables, Ladders and Chairs PPV.  It did its job, leaving us wanting more, but it is a cruel trick to put on such a good match for nearly fifteen minutes and then gives us such a hollow ending.

Still, were all disappointments so thoroughly enjoyable I would be a proud advocate of disappointment, and it is worth remembering that WWE stacked the 2014 Survivor Series with all manner of surprises and returns because it was the first event to be offered completely free to new subscribers of the WWE Network, and its job was to encourage people to stick around and sign up for a paid subscription in December.  Wanting to see the conclusion of Wyatt/Ambrose was a key part of that strategy.

A more irredeemable disappointment on the disc comes in the form of a filler match between Slator Gator and Adam Rose and his dreadful Bunny (a match so weak it was made on the fly backstage, because WWE knew it couldn’t be promoted), but even that can be excused as a necessary crowd calmer between the awesome Wyatt/Ambrose match and the Divas Title match between AJ Lee and Nikki Bella (itself a buffer between the semi-main event and the actual main event).  All in all, there is very little to mar the enjoyment of this event and so much to love.  So long as you choose to ignore the fact that just a few months later The Authority returned to power anyway, and the three remaining superstars on Team Cena were fired, only to be rehired again (thanks once more to Sting), then this is a perfect WWE event, with multiple twists and turns to keep you on the edge of your seat from start to finish. Buy it to own a piece of history, or buy it for the matches, but whatever you do, buy it! Dan McKee