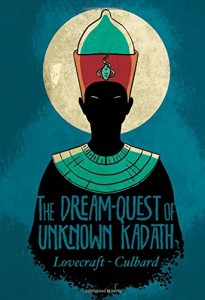 The Dream-Quest of Unknown Kadath – H.P. Lovecraft & I.N.J. Culbard (Self Made Hero)
Lovecraft’s tales of twisted terror and other worldly horror always bordered on the realm of dreams and nightmares, his stories of unseen things that lurked just beyond the veil, gibbering and whispering to the protagonists wetted the imagination of many a hungry young mind, filing their nights with half formed fear and dread illusion. The strange and awful cults and the creatures that did the bidding of the Old Ones while waiting for the stars to align, have haunted my sleep for more than three decades, but while his unimaginable monstrosities plagued my nights, it was his Dream Cycle, his tales of the alternate world and curious dimension that could only be entered through dreams, that fuelled my imagination.

‘The Dream Quest of Unknown Kadath’, the novella that arguably forms the core of the previously mentioned Dream Cycle, was the longest and most detailed of the collection of stories, and follows protagonist Randolph Carter’s (the re-occurring character whom Lovecraft modelled on himself) journey to find the city of Kadath, a place he has dreamed of since childhood. Lovecraft’s book charts Carter’s quest to find this fabled and mysterious city, and the creatures and individuals that he meets on his travels, and Culbard’s adaptation captures the mood, feel and tone perfectly, opening a door for the reader to follow Carter down the path that his own mind has made reality in this bizarre, and at times, haunting and troubled world. Culbard has, and I say this with all due deference to Lovecraft whose work I’ve adored since childhood, taken the original two dimensional model created by its author and lovingly recreated it in technicolor, three dimensional glory, bringing the ensemble cast and fantastical locations to mystical and astonishing life. It’s a beautiful, ethereal adaptation of a world and story born from longing, desire and a desperate quest for understanding and a need to find somewhere to belong, one that Culbard with his timeless and beguiling artwork and innate understanding of the themes that run through the original, has made manifest and in doing so, he has created something incredible in its own right, that will find a place in the hearts of fans, both old and new alike. The gateway is open… Tim Mass Movement