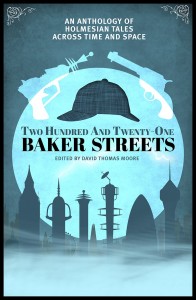 Two Hundred and Twenty-One Baker Streets – Edited by David Thomas Moore (Abaddon Books)
Whilst it’s true that thanks to Mark Gatiss’ and Stephen Moffat’s ‘Sherlock’, Arthur Conan Doyle’s most famous creation has reached the same dizzying heights of fandom that he did when his adventures originally appeared in ‘The Strand’ more than a century ago, those of us who grew up fascinated and beguiled by the tales of the consulting detective know that his moment in the spotlight of mass consciousness will be, as all things are, fleeting. Fame is momentary, but Sherlock Holmes… Sherlock Holmes is eternal. And when the legions enraptured by his latest incarnation in moving images move on to the next must-see show, those of us who for whom he is, first and foremost, a literary hero will still be here, submerging ourselves in the many tomes dedicated to his continuing adventures. Tomes such as ‘Two Hundred and Twenty-One Baker Streets’ which transports Holmes and Watson into a multitude of different possibilities and scenarios throughout time and strange dimensions.

‘Two Hundred and Twenty One Baker Streets’ is a thoroughly entertaining and absorbing ride through the many imagined lives and guises of the partners in detection, with each story offering a unique vision of, and take on, the pair, while at the same time retaining the core, and essence, of Doyle’s creations. As with every anthology, some of the tales on offer strike an incredibly personal chord and stand out from the rest of the pack due to subject matter (and individual taste), and ‘Two Hundred..’ is no exception with James Lovegrove’s ‘The Innocent Icarus’, Jenni Hill’s ‘Parallels’, Adrian Tchaikovsky’s ‘The Final Conjuration’ , Emma Newman’s ‘A Woman’s Place’ and Guy Adams’ ‘A Study In Scarborough’ still resonating long after I’d finished reading them. That’s not to say that the rest of the adventures in this collection are sub-standard, they’re not, not by a long stretch, as the quality of writing and imagination on offer are staggering, taking Holmes and Watson to dizzying new heights and far flung places and involving them in mysterious and alien cases and enigmas. ‘Two Hundred…’ is a triumph, plunging the familiar and beloved characters into parallel worlds and universes that tease a myriad of possibilities and wonders, and I would wager that each story could easily flourish in a series of full length novels, which in turn, would ensure Homes literary survival well into the next century and beyond. The game is well and truly afoot… Tim Mass Movement