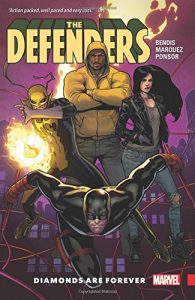 In the four colour universe, death has never kept a hero or villain down or got in the way of a good story. And in Diamonds Are Forever, it doesn’t stop Luke Cage’s oldest adversary from returning to New York to settle old scores and “reclaim” everything that he considers to be “his”. While the day-to-day dynamics of street level and city wide criminal enterprise may have changed since this particular psycho last strutted through the streets of Harlem in flared trousers and garishly coloured shirts, greed, entitlement and subjugation have remained constant. And before Luke can offer a whispered “Sweet Christmas”, his nemesis has attempted to take out all of the Defenders in explosive fashion to remind the streets who he is and to warn anyone who might be tempted to stand against him of the foolishness and folly of undertaking such an ill-advised venture. Which makes it personal, kicking the plot into high gear from the word go, with the team going full throttle in their pursuit of the returning bad guy who, having seen a gap in the market with Wilson Fisk attempting to go straight, would be Kingpin.

But this gangster is smarter than your average bear, and has come back, in much the same way Steve Austin did after he crashed his test plane, faster and stronger than he was before and seems to know every single move that the Defenders make before they make it. And even when they do manage to catch a break, the back from the dead big bad, thanks in no small part to the unhinged and “winning” personality of certain heavy armed vigilante, manages to slip his chains and stay one step ahead of Cage, Rand, Jones and the Devil of Hell’s Kitchen. And while they’re busy pursuing him, Cage’s old foe is also busy seizing control of the underworld enterprises of New York City, a plan that culminates in a shocking, jaw dropping finale that not only ensures Diamonds Are Forever closes with a gut punch, Saturday morning chapter play style cliff-hanger ending, but also leaves it’s readers desperate for more.

He’s done it again. Bendis has crafted a stone cold classic, that while emulating seventies hard edged thrillers like The French Connection and paying homage to the gritty, street level stories of Cage and company’s original New York exploits, brings The Defenders up to date with a bang heard half way around the world. Smart, funny and brimming with fully rounded characterisation, superb dialogue and the knock out artwork of David Marquez, The Defenders is one of those books that you need to get in at the ground level with, and if you’re half as hip and happening as I think you are, that’s exactly what you’ll do. There’s a whole heap of reasons why Brian Michael Bendis is, rightly, regarded as being the comic book cream of the crop. And The Defenders is one of them.  Get it. Get it now.  Tim Cundle