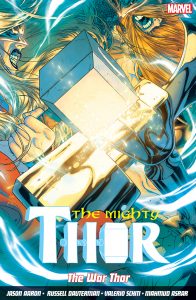 It was inevitable that the war, started by Malekith with a little help from Loki, engulfing the Ten Realms would eventually stain the souls of the gods. How could it not? A war aided and abetted by one of the chosen of Asgard was always going to extend its reach beyond that of the mere mythological mortals who dwell in the shadow of Yggdrasil. So when Sindar sends her fire wielding demon hordes to lay waste to the Dwarven Mountains of Nidavellir, in whose cavernous depths the Elven refuges of Alfheim have found shelter, the horror of war is finally hammered home in heart-breaking, gruesome and devastating fashion as one of the last great Asgardian “innocents” is caught in its clutches.  Tortured by his experience, and driven by a need for vengeance, he takes up the Mjolnir that escaped the Ultimate Universe, and in doing so, becomes the War Thor, an avatar of conflict whose bellicose nature can never be truly satisfied and whose appetite for carnage is only equalled by his host’s desire for retribution.  And together, they take the war to those who would wage it on innocents, and in doing so begin the War of the Thors.

Which, if Jane Foster wasn’t dying wouldn’t be so much an issue for the Mighty Thor, but as her end is drawing ever closer and she has finally accepted that she’s caught in a fight she can’t win, every time she draws on the power of Mjolnir, it hastens her impending fate. But draw on it she must if she is to save the Ten Realms from the fury of the War Thor. As the Realms slowly disintegrate and the war arrives at the pillars of Heaven, the odds against this particular chapter in the long and storied life of Thor ending well begin to look increasingly grim. War is hell, but if Malekith has his way, even the realm of the dead and damned will be swept away and submerged by his thirst for conquest and destruction unless Thor can find a way to stop him and end the madness he’s unleashed.

Exploring, questioning and embracing ideas of mortality and the nature of, and attitudes toward, death and how war, pain, horror and the very human concept of “an eye for eye” can twist even the gentlest of souls beyond breaking point, The War Thor while using the background of conflict to navigate its themes, is an incredibly personal and immediate story. Aaron refuses to soften the brutal nature of his story and by doing so, it becomes a much more intimate study of how individuals are shaped by circumstance and their surroundings and while it isn’t always an easy read, guided on its journey by the sumptuously detailed artwork of Schiti and Dauterman, it is nonetheless a thoroughly engrossing one.  The end is nigh, so hold tight because the Mighty Thor is going to go out swinging… Tim Cundle