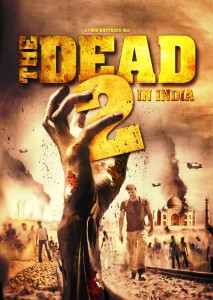 The Dead 2: India (Altitude)
A stunning follow-up to the Ford brothers’ ‘The Dead’, ‘The Dead 2: India’ is more of the same:, seeing a stranded American struggling to traverse a terrifying dark continent, where the dead sway ominously to and fro, to rescue his pregnant girlfriend… from her marriage-arranging father as much as from the zombie hordes. The film scores big because it looks amazing, the epic scenery of the countryside and the grimy slums of Mumbai providing a visceral cinematic backdrop for the action.

The acting is top drawer too, and you care for every character you meet, with young street urchin Javed in particular imbued with massive emotional weight by star-in-the-making Anand Goyal.

The zombies themselves are incredibly creepy, shambling but relentless, drenched in dust and desperate hunger, and with their single dot pupils staring mercilessly from milky eyeballs will quickly freak you the fuck out. And the (often inventive) sequences where they have the living characters under attack are some of the tensest you’ll have seen in a zombie movie for years, recalling the golden age of Romero. Proper nail-biting edge-of-the-seat stuff, and with a bleaker than bleak climax that refuses to compromise the film’s gritty tone, ‘The Dead 2’ is genuinely powerful. Ian Glasper