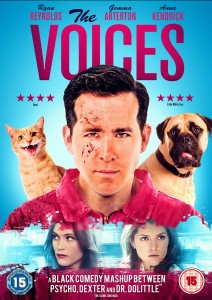 The Voices (Arrow Films)
Do not be concerned to see Ryan Reynolds name headlining this blackly comic psychological horror, because this is more a tour de force turn in keeping with his ‘Buried’ role than anything as superficial and insipid as ‘R.I.P.D.’ Here he plays Jerry, a troubled, socially challenged factory worker with a dark past, who has to make weekly visits to his psychiatrist (who constantly reminds him to take his medication) and has an intense all-consuming crush on a fellow worker. He also has an unusual relationship at home with his (talking!) cat and dog. If all this sounds just too bizarre and surreal, stick with it, because as the film unfolds, you realise that whether Jerry has taken his medication or not has a drastic effect on his perception of the world and how he interacts with it. The film somehow manages to walk a very thin tightrope between being a (very) dark comedy, a grisly serial killer thriller, and a tragic study of mental illness. Despite his increasingly abhorrent actions, Reynolds even makes you like and root for Jerry, and – it has to be said – Mr Whiskers, the cat, is one of the greatest, and most sinister, animal character creations ever. Reynolds voices both Mr Whiskers and the dim-witted and well-intentioned dog, Bosco. Supported, more than ably, by the likes of Gemma Arterton and Anna Kendrick, all of them on top form, he energetically propels one of the most enjoyable and provoking horror/comedy/crime mash-ups of recent years, a wonderfully funny, desperately sad film that you’ll want to re-watch over and over. Ian Glasper