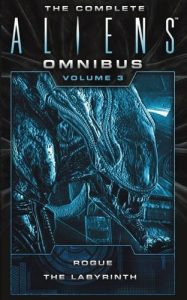 I must be honest. Other than for once reading the early Dark Horse comics, I’ve never really dipped my toes into the extended Alien universe – which is to say, the books – beyond flicking through them with a vague and less than captivated curiosity whenever I found them lurking on charity shop shelves. The comics seemed to me fair-do’s so far as spin-offs went – graphic extensions of a graphic film franchise – but I was never sold on the fact a cinematic series conceived from the outset to be fundamentally visual – alien, indeed – would translate particularly well into prose. But, of course, after Ridley Scott’s original, whipped into macho frenzy by James Cameron’s reins, the franchise departed anyway from the Giger vision and become a whole different beastie – Starship Troopers with a different type of bug; space-opera instead of space suspense, the science fiction equivalent of Die Hard 2 to Die Hard. Don’t misunderstand me – gung-ho the franchise became but there was still stonkingly enjoyable stuff therein – but gone was the claustrophobia of the Nostromo, Alien’s Nakatomi Plaza, replaced by far more open worlds – in John McClane’s case, Dulles International Airport, and in Ellen Ripley’s, Hadleys Hope. The claustrophobia had to go, I suppose – after all, as Ripley might have said, how can the same thing happen to the same girl twice?

And so here we are, in Alien’s far more open worlds, with new casts of characters including our protagonists, Captain Joyce Palmer and Colonel Dr Tony Crespi, respectively, fighting for their lives in the strobe-lit environs of the Charon penal colony and space station Innominata, in the two novels that make up this third omnibus edition. Rogue, Sandy Schofield’s 1995 adaption of the 1993 comic series, and Labyrinth, S.D. Perry’s 1996 adaption of the 1994 series, incarnated again by Titan Books, deliver precisely what you’d expect in tales of a mad professor’s insane alien creation and, er, a mad doctor’s insane experiments resulting in the continuing misadventures of our acid-bleeding friends. Both books are briskly written, with some good atmosphere and character work, as well as further insights into the forces behind the this and that of this universe, and if what floats your boat is alien dribble and space marine wee then you’ll get exactly what it says on the tin. Not for me but don’t let that stop you going for it, because these offerings are fine enough. In space, no one can hear you say what the fuck does he know? Mike Wild