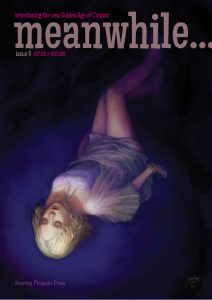 I can’t remember the last time I read an anthological periodical dedicated solely to comics. Whenever it was it was certainly a long time ago. But more importantly, I can’t remember reading one that I enjoyed as much as Meanwhile. In fact, I don’t think that I’ve ever enjoyed one this much. See, the thing with periodicals is that for the most part, there’s always at least one or two stories contained within the compendium’s pages that just don’t resonate, or make any connection with me at all. However, that certainly isn’t the case with Meanwhile as every tale told, every chapter presented allows your imagination to drift away on flights of fancy, lost in the artwork and captivated by the prose. That doesn’t mean that every story featured is an incredible feat of artistic and literate creation; as with any compilation, some burn brighter than others, but each of the contributions did at least strike a chord and none caused my attention to waver for even a single second.

The big guns, are of course Gary Spencer Millidge’s long running odyssey Strangehaven, the disquieting and odd fable of life in a small, rural English village where nothing is what it seems to be and where something terrible remains unseen, bubbling just below the surface, and David Hine and Mark Stafford’s The Bad, Bad Place, a gothic horror mystery tour de force that draws equal inspiration from M R James and the otherworldly terrors of H.P. Lovecraft. While both continue to weave their long standing magic through the pages of Meanwhile, like modern day Saturday morning Chapter Plays, they’re far from the only reason for diving headlong into this book – I’m loathe to call it a magazine as it’s far too weighty a tome to be dismissed so easily.

Then there’s Matthew Dooley’s My Name is Judas Iscariot, which deals with trying to maintain faith in the face of the raw emptiness that accompanies the sense of being abandoned by God while My Holiday of Death by Nick Burton is an alternative and darkly humourous and delicious take on the traditional school “What I Did On My Summer Holiday” essay and Gregory Mackay’s A Tour of Manhattan Island is a whimsical account of the hidden, and not so hidden, wonders of Manhattan as seen through the eyes of it’s anthropomorphized central character.  The three aformentioned contributions are worth the price of admission alone, and when added to the already mentioned heavy weights, ensure that Meanwhile should be near the top of any discerning fanboy or fangirl’s essential reading list.  And those five stories? They don’t even amount to half of the content of this issue.

Stylistically, the artwork and prose reflect the disparate voices of the creators involved, but the quality is never less than sublime and after all, variety is the spice of life and Meanwhile is the Saffron of indie comics; an expensive, much sought after delicacy. Which brings me to the cover price that is, admittedly, at first glance, a little steep, but the more time you spend with Meanwhile, the more you realise that, like my old mum is so fond of saying “You get what you pay for”, and that it’s worth every penny (and a little bit more) of its entry fee.  Bravo Soaring Penguin, bravo… Tim Cundle