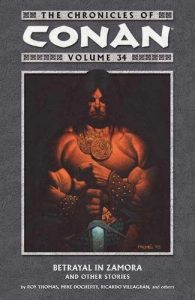 With Betrayal At Zamora And Other Stories, Dark Horse’s The Chronicles Of Conan reaches its final tome. Volume 34 in this long-running series collects issues 268 through 275 of the by now not-so-best-selling Marvel comic Conan The Barbarian, though bowing out not with a whimper but a bang. To be honest, more than one bang. In fact, a lot of bangs. And that’s without the nookie.

Virtually every page of these autumnal adventures from 1993 seems to be on fire. It’s as if writer Roy Thomas – who else? By this time Thomas was Conan – decided that if the comic was going, the sandpit was going, too, and he’d just blow up fucking everything. Fortresses go, mountainsides go, cities go, as the Son Of Cimmeria hacks, chops and slices his way through demonic fog, carnivorous trees, ancient wizards and rock gods (no, not The Rolling Stones: the real thing). It’s a spectacular climax to his comic adventures – ‘comic’ because they were to continue in Savage Sword Of Conan magazine – but also a little bitter-sweet as once the bangs are done we’re left with a barbarian who – as hinted at in the previous volume – has become a little lost, haunting bars and wastelands, with his Free Companions in tow, desperate to find a war, until he finally faces his … well, Betrayal At Zamora.

Now simply ‘inspired’ by rather than based on any of Robert E Howard’s original stories, Thomas more than matches Howard and throws in everything but the kitchen sink, or whatever it was they used to wash their pots back when between Atlantis and now. From Tantusium to the Islands Of Pearl, from the otherworldly abyss beneath Dagoth Hill to Shadizar The Wicked City, he delivers in these last few stories not only a fitting goodbye to this incarnation but also a nod to much that’s gone before (editor’s note: “last appeared in issue 6”) and it’s all actually quite touching, if you’re a bit of a softy, like me, and unlike Conan himself.

A shame it doesn’t actually end – the final story continues in Savage Sword, in which thereafter we read of Conan’s later years – but this is where the comic ended, and thus do The Chronicles Of Conan. Do I really need to tell you to buy this? I mean, if you’ve bought the other 33, there’s no way you’re not going to, right? If you haven’t … Hmm, where to begin? Mike Wild