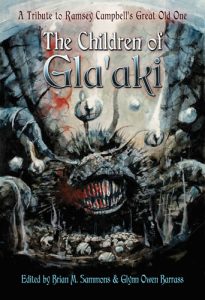 Last year Dark Regions Press ran an Indiegogo campaign to help fund the creation of three books. One of those was The Children of Gla’aki.

To tell the truth, I have never read anything written by author Ramsey Campbell (I know some people right now are saying I should be sacrificed to some Elder Gods for that). His name is one that is revered in horror fiction so if, like me, you’re looking for a way in and to understand the fandom, then being a group of short stories from a variety of authors (including the man himself) and based around Gla’aki, it’s a great place to start.

So let’s take the stories one by one…

The Inhabitant of the Lake by Ramsey Campbell: Thomas Cartwright wants to concentrate on his artistic career so he decides to rent a house by a lake in Brichester. After having strange dreams and finding a set of books called The Revelations of Gla’aki , he calls his friend Alan to help him escape a disparate and deadly situation that has otherworldly origins. despite being written over 50 years ago, this story still holds a distinct power, drawing you in almost right away. Quickly paced while not skimping on the horror, it is the perfect opening for this book.

Country Mouse, City Mouse by Nick Mamatas: Twins Maria and Yiannis share a special bond that let the other know what they are feeling. When Maria senses that her brother has changed she goes searching for him, only to find out he is searching for her as well. I loved the premise, but at times jumping time lines, jumping character to character within a single paragraph or sometimes even sentence, to my mind at least affected the rhythm of the story making it harder to connect with.

Tribute Band by John Goodrich: After his mother dies, Tommy takes his friend and band mate on a road trip to find an old member of a now forgotten 1970’s rock band. At least that’s what he claims is the purpose of the trip.  In reality Tommy seeks one of the books of the Revelation of Gla’aki; one that deals with sound and other dimensions. This is an interesting short that postulates that when it comes to the promise of power and the other worldly, friendship means nothing.

In Search of Lake Monsters by Robert M. Price: Professor Rivenbark is asked to consult on a documentary dealing with the possibility of something living in Deepfall Waters. Though he feigns disbelief at the rumor, he knows more than he is letting anyone know. An intriguing short in which we are led to question whether the character of Rivenbark is not quite what we first believed. While not fast paced or horrific, it is a well written story that is more about wonder and keeping things hidden.

The Collection of Gibson Flynn by Pete Rawlik: Gibson Flynn, a literature teacher at Miskatonic University, is on his annual trip to the book festival in Vizcaya, Florida to look for rare books. While there he finds he can acquire a copy of volume seven of The Revelation of Gla’aki , and all he must do is to runs errands for a shop owner in a set amount of time. The first really mature story at in this compendium, it at first seems to be a sly nod to book collectors only to turn into a truly disturbing tale rather quickly. Mean spirited and sexual situations make this tale a stand out.

The Secret Painting of Thomas Cartwright by W. H. Pugmire: Simon wants to know about a mysterious valley from a painting by Thomas Cartwright and enlists the help of a local. But Simon’s quest is not really the valley, but the entity that dwells in the lake there. Seemingly a story about understanding myths, it turns out completely differently.  Whilst there is indeed a painting, it is only an afterthought and has little impact.  There is, though, a swerve at the end but in my view it comes too late to make a difference.

I Want To Break Free by Edward Morris: Jimmy, a long time patient at Mercy Hill, recounts in a recording how he came to be in the state he is in. While telling his tale, he offers a dire warning for the future in a story which is uncomfortable and, when it all comes together, sad and rather touching.

The Spike by Scott R. Jones: Eidolon, the company founded by recluse Aldo Tusk, has headhunted Domitian Hark to help find a way to make a mysterious metallic spike give up its secrets. As Hark starts to make headway into the project, Tusk moves it to a lakeshore where the spike seems to become alive. A slower paced story that leaves the reader wanting to know more about Tusk rather than the main character.

The Dawning of His Dreams by Thana Niveau: An innocent race of beings is slowly taken over by a malicious entity. As time passes, knowledge is transferred to them from this entity as its true attentions are learned. A nice story that might give the origins of Gla’aki, or a piece of its history. A bonus really in this collection as it shows that Earth was not the first to come into contact with Gla’aki.

The Lakeside Cottages by William Meikle: One evening over dinner with occult detective Carnacki and Arkwright, Dodgson recounts a story about how Carnacki went to visit a friend at Brichester University. While there he is called on to help a sick student that has a weird green aura and stench about him. Another surprise this time being the inclusion of another well-known icon in weird fiction. And the story was interesting as well.

Invaders of Gla’aki by Orrin Grey:  A new video game is placed at a convenient store and entices a player completely. As the game goes on, the player becomes sicklier until he reaches the last level when the game becomes all too real. The start of this one is off-putting for the first little bit until it gets into a groove.

Scion of Chaahk by Tom Lynch: Bill and David are researching the Yucatan peninsula when they discover a hidden well that leads into an underground chamber with an altar and a strange three serpent statue. When they go back the next day to record their finding they find something alive in the chamber they thought was a myth. Another overly horror tinged story that moves quickly and ends quite satisfactory. If only this one was longer it would have been one of the best in the collection.

Cult of Panacea by Konstantine Paradias: A group is working on making sure information connections are secure throughout what might be a city that is dying or possibly dead. During the whole time Tom-C tells a story of how Gla’aki and a god fight. Weirdness is an expected aspect of stories in this book. With that being said, not all weird fiction is crafted the same, as sometimes more detail is needed to make the story flow more evenly, though the history that is giving helps flesh out Gla’aki.

Squatters Rights by Josh Reynolds: Philip Wendy-Smythe who is always trying to become part of the fringe community of any cult that will take him decides to buy a row of six houses by a lake. But what he doesn’t know is that there are forces that want the property back at any cost. A fun pulp-ish tale that connects to the Carnacki stories and helps tie another story together with this one. While at first confusing it quickly becomes amusing as the main characters are constantly making jokes and belittling the character Wendy-Smythe for his ever present bad decisions.

Beneath Cayuga’s Churning Waves by Lee Clark Zumpe: Tisha Hewitt a former reporter is shadowing a film crew of an exploitative TV show dealing with legends and urban myths. When she meets with her friend, a professor from Miskatonic University, he raises her interest in a local legend dealing with a cult that worshipped Gla’aki. A fun take on Gla’aki again being in a different place thanks to its followers. What helps this story out more is that it brings in Native American folklore also into the mix to expand the Gla’aki legend.

Nature of Water by Tim Waggoner: Mark is trying to find some peace in life after spending most of it drunk. He goes to back a childhood vacation spot only to realize there is only one way for this to happen. This is another tale that takes place at a different body of water but still deals with monsters. This time though the monster is sometimes our own self and forgiveness may never come, only the delusion of it.

Night of the Hopfrog by Tim Curran: The film crew for Haunted: Dead or Alive has decided their next exploration and exploitation would be Lakeside Terrace and the supposed legend of the Hopfrog. It quickly becomes very clear to them that the legend is not just a myth but very real. This story might put some people off on how it is written but in the end we are more of a passive observer of something that happened in the past. Quickly paced and becomes more and more engrossing as this tale races to the end.

Mirror Fishing by John Langan: Pat is taught how to travel into a different reality by his babysitter by using his desire. Once there he learns that the cost of his entrance might be more than he is willing to give to an entity called Auld Glaikit. A very fitting story to end this collection and one that at first seems harmless but becomes darker as it continues.

For a collection The Children of Gla’aki is a well put together and engrossing tribute with only a one or two stories that fall flat or miss pulling the reader in. Some of the standouts include Scion of Chaak, Beneath Cayuga’s Churning Waves and Night of the Hopfrog; and my personal favourite, the outstanding The Collection of Gibson Flynn, makes for a great way to honor as well as to expand Campbell’s Great Old One creation. Jason Bonton