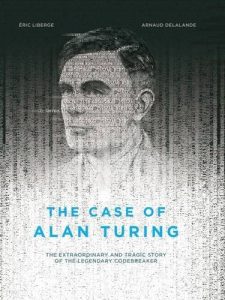 The apple that was to eventually see off Alan Turing makes its first appearance on page three of Eric Liberge and Arnaud Delalande’s graphic adaption of the life and death of the mathematical genius and codebreaker of Bletchley Park. It’s a motif that recurs throughout the book’s eighty eight pages, not least in the transformation fleetingly and tellingly of fiancee Joan Clarke into Walt Disney’s Snow White – one-time ingester of similarly sinister fruit – and in the inevitable jump to the naming of a certain brand in Silicon Valley once the graphic novel’s 1954-set bookends are concluded. The bookends are pure speculation, of course – no one can ever know the exact circumstances of Turing’s last hours – yet they, along with laudable stabs at Turing’s psyche and thought processes elsewhere – form The Case of Alan Turing’s primary appeal. The problem comes in what is left. The theoretical emotional insights gleaned from the bookends must make way for the well-documented history of Hut 8 and the breakthroughs Turing and his colleagues made therein – a story visually already well told in, say, Benedict Cumberbatch’s The Imitation Game (2014).

A graphic novel is not a film, of course, but as Liberge and Delalande cite this and others as sources in creating their work, in doing their problem becomes manoeuvring graphically within the same constraints as the film-makers: delivering something different based on a sequence of discovery and breakthrough enacted upon a very small stage that is uniquely by its nature as inflexible as binary code. Here, I’m afraid, is where the code breaks down – there is absolutely nothing lacking in the script and art on offer, but neither is there much flourish. Both writer and artist deliver as fine an interpretation of events as they are able, but ultimately they are working with a very static storyboard and there can be no surprises here. What’s left is a project that is certainly worthy but feels vaguely superfluous, deserving of purchase if you are of a mind, otherwise something for the Alan Turing completist or the generation who prefer to take their history in picture form, in this case of the ruination and demise of a truly one-of-a-kind individual who soared then died tortured in more ways than one at the hands of prejudiced and considerably lesser men. Mike Wild