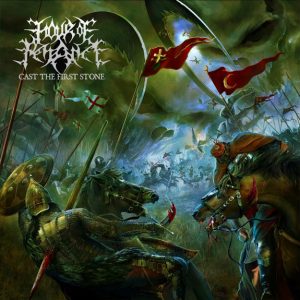 Death metal is a little bit like coffee without sugar, beer that’s in excess of 10% alcohol, Marmite smeared on the side of a tree or trying on your wife’s knickers whiles she’s at work…It’s an acquired taste.

It’s been a while since I dabbled with metal that truly is marbleized to its core with death, it’s been Serpents of the Light long if that gives you any inclination as to how long since I’ve dabbled.

Cast the First Stone is Hour of Penance’s seventh album release but my first foray into their arena of aural death. So warily having stepped back into the rusty ring of death metal for a nine rounds with Hour Penance here is how I faired.

Right from the first bell I’m in familiar territory as Burning Bright wastes no time with its introduction, picking and blast beats that resemble short bursts from an AK that lead me seductively to its Slayer infused solo ending, cracking start. Title track Cast the First Stone opens with a doomy Paradise Lost feel riff which is interwoven through the entire track and it works phenomenally well.  Rounds three and onwards is just a superlative masterclass in musicianship, relentless but not so much as to make you lose interest (which this genre can do very quickly), it’s tight in every way possible with some lovely time changes including the odd sneaky beat down. By the end of round nine I’m totally bamboozled and outwitted by the sheer production of this monster which was engineered, mixed and mastered by the Bass player Marco MastroBuoni. A genre of music that sits so far on the left hand side of the sound spectrum that trying to get any kind of separation is an astonishing feat!

If you’re a fan of Death Metal then you are probably well aware of Italy’s finest Hour of Penance and you’re already feasting on the carcass of Cast the First Stone. If you’re knew to the genre or like me you have lost touch I can honestly say there is no better introduction than Cast the First Stone.

I adore this album and I’m going to be devouring their back catalogue with gusto. So, if you’re like me and you like to lick Marmite from a tree, treat yourself to Cast the First Stone. It’s as good as Death Metal gets. Which is very, very good… Alan Wright