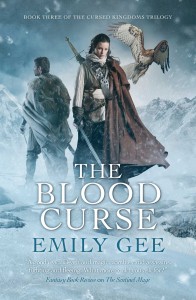 The Seven Kingdoms are in the grip of an ancient and terrible blood curse. Thousands have died. Thousands more will die. Only one man can end the curse. The fugitive Osgaardan prince, Harkeld, is that man – whether he likes it or not. But the bounty on Harkeld’s head is high. He has outrun his father’s soldiers, but he can’t outrun the assassins who seek him – Fithians, trained in the art of killing. Even the Sentinel mages who guide and guard him are no match for Fithian steel. Faced with the ever-present threat of death, Harkeld must learn to use his fire magic. Or die. Meanwhile, dark plots are unfolding in Osgaard’s gold-tiled palace, snaring Princess Brigitta and those she loves. And in the eastern kingdoms, young orphan Jaume journeys with a band of mysterious and dangerous fighters, heading north for a purpose he does not understand.

Okay, so let me start by throwing this in the honesty box, I’ve got a bit of a sentimental attachment to Emily Gee and this excellent series. A while back, after being a 10+ year reader of Mass Movement I got the opportunity to start reviewing books for them; they were short of somebody who loved to lose hours at a time to monsters, myths, swords and sorcery and I just so happened to fit the bill, well, at least on the side of interest, if not writing skills.

When Tim Mass Movement handed me my first pile of novels to read and write up, the top one of the pile happened to be ‘The Sentinel Mage (The Cursed Kingdoms Trilogy Book 1) by Emily Gee’ the reality of what I had agreed to set in but was very quickly followed by the relief of being immediately drawn in to an excellent novel.

I did not get the follow up through any time but loved the first so much that I bought a copy to keep up to date with the unfolding tale anyway, again, the second novel in the trilogy ‘The Fire Prince’ was killer. Packed full of interesting developments, both in character growth, and in events taking place in the kingdom.

Right, now onto the novel at hand, this picks up dead on where the predecessor leaves you with a lot going on, I love it when that happens. Gee does not let up and straight from the first word in I was gripped, the three groups of interest all split still and with their missions building in intrigue and importance equally, you really do need to read what came before this, if you don’t, you will not only have no idea of what is at hand, but also be missing out on something any fantasy fan will enjoy. Gee does not disappoint at all in this one, there is no fat to trim from the tale and there is no attempt to do so, bare bones, rock solid fantasy at its best. Well-crafted characters in a well-built setting living through a very well thought out and executed plot line.

As a final novel in a trilogy ‘The Blood Curse’ ties up all loose ends and serves its purpose to the full potential I was hoping for.  Emily Gee, take a bow, your work here is done.  Gav.