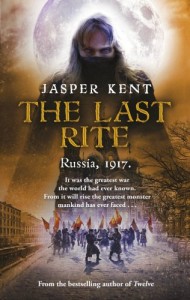 Russia – 1917. Zmyeevich, king of all vampires, is dead.
History records that the great voordalak – known across Europe as Dracula – perished in 1893 beneath the ramparts of his own castle, deep in the mountains of Wallachia. In Russia, the Romanov tsars are free of the curse that has plagued their blood for two centuries.
But two decades later and Tsar Nicholas II faces a new threat – a threat from his own people. War has brought Russia to her knees and the people are hungry for change. Revolution is in the air.
Mihail Konstantinovich Danilov – who himself carries Romanov blood – welcomes the prospect of a new regime. Like his ancestors he once fought to save the Romanovs from the threat that Zmyeevich brought them. Fought and won. But now he sees no future for a Russia ruled by a tyrant. He is joined in the struggle by his uncle, Dmitry Alekseevich – a creature born in a different era, over a century before. For more than half his existence he has been a vampire, and yet he still harbours one very human desire; that his country should be free.
But the curse that infects the blood of the Romanovs cannot be so easily forgotten and Mihail soon discovers that it – that he – may become the means by which a terror once thought eradicated might be resurrected . . .

Some novels just grip you hard and refuse to  let go, ‘The Last Rite’ is definitely one of those, and, as the title suggests, the last in a series, as a review novel I was given the fourth instalment in this series a little while back and, whilst confusing (as you would expect starting with the fourth) it was a very compelling read, so my bank account got a little worse off while my bookshelves got a little fuller and I started back at the beginning, no regrets at all. So, now we are 105 years ahead and the Russian vampire tale is finally reaching the end, and what an end it turns out to be, the narrative takes a slightly different style in this novel, this works though, if fits in with the progress in the timeline and development of the characters in focus very well, luckily considering that in the blurb you already know Zymeevich, a major player in this series is dead. Kent does have a tendency to delve very deep into the descriptive, for some this may make the pace feel a little slow, but it does not take anything away from the quality.

Reading up in order is very highly recommended with the Danilov quintet, as a stand-alone ‘The Last Rite’ would most likely make for a pretty good read but I do think it would be quite a struggle at the same time. Gav.