Warning: preg_match() expects parameter 2 to be string, object given in /var/www/vip4/sites/vip6102689/httpd/htdocs/wp-includes/formatting.php on line 4866
 The Great Tyrant - The Trouble with Being Born - Mass Movement
x
Spread the love 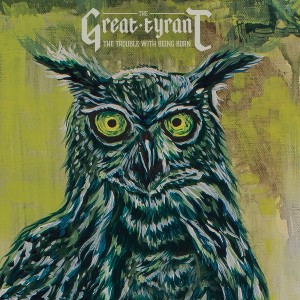 The Great Tyrant – The Trouble with Being Born (Relapse Records)

This album is a menacing and unnerving taste of the past. Let me explain. ‘The Trouble With Being Born’ is the second full length album from Fort Worth, Texas’ now defunct ‘The Great Tyrant’. It has finally been unleashed on the masses by the two surviving members of the band, Darren Beck and Jon Teague. Bassist Tommy Adkins tragically committed suicide on the eve of it’s release in the late ’10s and the album has sat dormant ever since. Teague and Beck’s current incarnation, Pinkish Black, have also recently released a new album and to coincide with that, the duo have decided they didn’t want this album to go unheard. The pair wanted to close the book on the band once and for all and it is well worth the wait. This 9 track LP shows the genesis of the mad genius that is Pinkish Black and is just as experimental and genre melding. The ominous and sometimes harrowing sounding three piece open with ‘Closing In’ which creeps along with a menacing gothic feel, coupled with the pained and distinctive wailings of Beck’s vocals. Tracks like, ‘The Apple Of Your Eye’ shows flashes of Zombi and hints of Fuck Buttons and personal favourite  ‘Handholder’ feels like a Deafheaven song melded with a slow doom epic, dragging the listener along at the speed of cement drying. The album closes with the ever so slightly upbeat ‘Weidorje’. Here, the Atkins and Teague rhythm section lumbers along in the background like a heavy behemoth whilst Beck’s off kilter keyboard work and vocals sit uncomfortably on top. To summarise, the band themselves took their name from a character in the colourful, irreverent, sci-fi classic Barbarella. This album is named after a book written in the 70’s by pessimistic and tormented Romanian philosopher Emil Coiran. Combine these two things and you’ll have an idea of what ‘The Great Tyrant’s final offering delivers. Enjoy…  Richard Thomas