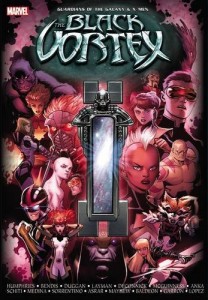 The Black Vortex – Sam Humphries, Brian Michael Bendis, Gerry Dugan, John Layman, Kelly Sue DeConnick, Ed McGuinness, Valerio Schiti, Paco Medina, Andrea Sorrentino, Mike Mayhem, David Baldeon, Javier Garron & David Lopez (Marvel / Panini)
It isn’t just gifts from Greeks that you should be wary of, presents from the Gods and ancient Celestials also come at a price, and sometimes that price, as when Prometheus gave man fire and when the Godhead gave the Viscardi the Black Vortex, is much too high. Fire encouraged humanity to exploit its surroundings, enabled it make better weapons and coins and thus set it on the path to self-destruction, while the Black Vortex evolved anyone who submitted to its influence to the absolute peak of their mental capabilities and physical prowess, transforming mortals into deities in an instant. Mortals were never meant to wield, or have, that kind of power though, and just as the Viscardi inevitably destroyed themselves, every species that came into contact with the Black Vortex after them also suffered the same fate; and so the Celestial’s (yeah, the Godhead is a Celestial) gift to those who worshipped him drifted into legend as a thing of great bounty and terrible power. Of course, this makes it just the kind of thing that some half-crazed, power mad lunatic galactic super-villain would love to get his hands on. And twelve billion years later, Mr Knife does just that.

In case you came in late, Mr Knife is really J’Son of Spartax, deposed ruler of the Spartoi Empire, father of Peter Quill (Starlord to you noobs, and the man who brought J’Son’s reign to an end) and now an inter-galactic gangster who just happens to have one of the most powerful artefacts in all of creation in his possession. Until it’s stolen by his son and his girlfriend, Kitty Pryde that is, setting in motion a chain of events that pits the X-Men and The Guardians of the Galaxy against themselves and each other as they struggle to ensure that the Vortex doesn’t fall into the wrong hands, (the wrong hands being Mr Knife and his associates Thane -son of Thanos – and The Brood). It’s a struggle that ends in the destruction of ancient civilisations and the near collapse of others, that rages from one side of the galaxy to the other, pulling sub-plots and arcs into its universe shattering and changing gravity well, and it’ll leave you breathless, scrambling for the nearest oxygen tank as you desperately try to assimilate and digest the enormity of ‘The Black Vortex’. It’s a love story, it’s the tale of a father’s quest for vengeance and a sons acceptance of who he really is, it’s a story of conquest, destruction, redemption and the nature of power, the endless possibilities of potential and how easily it can be wasted, of the destruction of the old guard and the emergence of the new, but more than that, it’s a story of beginnings and endings and how, if they are to flourish, all things must eventually change.

‘The Black Vortex’ is one of those multi-title crossover events that you keep telling yourself you’re going to read, but somehow never manage to pick up all the individual issues of the books involved and so tell yourself you’ll pick up the collected trade paperback at a later date, but then end up forgetting to do so after falling victim to the multitude of problems that everyday life throws your way. Do yourself a favour, don’t forget this time, write it down, order it now, do whatever you need to do to ensure that you read this book, because boys and girls, you really, really need to read it. The beautiful artwork is surpassed only by the incredible characterisation (and yes folks, it’s true, Nova is officially awesome!) razor sharp dialogue and engaging, exciting, slightly weird, and more than a little humorous, individual sub-plots that deftly weave in and out of each other before slowly merging to build a wonderfully satisfying, and rewarding, whole. But remember, and keep telling yourself this; you won’t pick up on everything the first time you read it, so don’t even try. You’ll fail and fail badly. So settle in, because once you’ve finished reading the first page, there’s no escape and you’re in for the long haul. Just accept it and keep reading. And reading and reading and reading. You won’t regret it… Tim Mass Movement