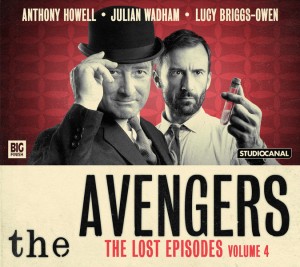 The Avengers: The Lost Episodes Volume 4 – Starring Julian Wadham, Anthony Howell, Lucy Briggs-Owen, Dan Starkey, Lobo Chan, Richard Cordery, Ozzie Yue, Lourdes Faberes, Karina Fernandez, Adrian Lukis, Elizabeth Morton, Matthew Cottle, Oliver Cotton, Philip Bretherton, Andrew Dickens, Daniel O’Meara, Michael Chance, Tim Treloar, Mark Bonnar, Robbie Stevens, Harry Myers, Daniel Hoffman-Gill & Written by James Mitchell, Lewis Davidson, Richard Harris, Eric Paice & Adapted by John Dorney & Justin Richards – 4xCD / Download (Big Finish)
So once again, we’re off to swinging sixties London for a brace of pulse pounding adventures in the company of John Steed and Doctor David Keel, the undercover crime fighting duo responsible for keeping England and her citizens safe from all sorts of ne’er-do-wells and trouble makers, both foreign and domestic. Although, the London that Steed and Keel call home isn’t exactly the swinging variety, having far more in common with the city (and indeed, the world) that James Bond, The Krays and “Dixon of Dock Green” called home than it does with any of those wild, crazy hippie types that hung around Kings Road. It might be rough and ready, but it’s a city at the centre of global commerce and business and one that our heroes are determined to protect at all costs.

This time, they find themselves embroiled in political conspiracy and assassination in ‘Kill the King’ when visiting foreign royalty arrive to formalise an oil deal, get a little hot under the collar while investigating a particularly nasty insurance fraud scheme in ‘A Change of Bait’, end up playing cat and mouse with a recently released convict and a rival gang as they pursue a hidden nest filled with illicit lucre in Hunt the Man Down’, before finally saving the world from a fiendish neo-Nazi plan to start World War III and establish a new Reich in ‘Dead of Winter’. It’s all incredibly exciting stuff, and very, very British, and while I’m a sucker for a good old fashioned, ladened with grit and grime, noir-filled, crime tale, this time around ‘Dead of Winter’ with its undercurrent of pulp science fiction and espionage led plot was the icing on the cake, and is more than worth the price of admission on its own.

John Dorney and Justin Richards have imbued each of their adaptations with a perfect sense of period, place and feeling, bringing the sixties, the real sixties and not some flower waving, kaftan wearing caricature of the decade, to life in each of the stories, and Julian Wadham and Anthony Howell have made Keel and Steed their own, perfecting the roles of the characters and their relationship. ‘The Avengers: The Lost Episodes Volume 4’ is a riveting, edge of your set collection of high octane drama that serves as a perfect reminder of how good things used to, and still can be. And contrary to popular belief, you didn’t have to be there to enjoy them. Jolly good… Tim Mass Movement