Mass Movement’s Ginge Knievil dusted down his codpiece and recently took a rock ‘n’ roll pew with Billy T. and Alice E. Atkinson from Basingstoke sleaze buckets The Black Bullets. Sit back and pour yourself a glass of something strong. Enjoy!

AEA: This fine gentleman is Mr Billy T, who’s our vocalist, and I’m Alice – responsible for bass duties and general flailing. The rest of the band is Skinny Pete, providing rhythm guitar and general coolness, Lance Skybaby on lead solos to melt your face, and Carl D. as the drum master who keeps us all in time.

MM: The sleaze rock genre (or call it what you will) can be easily faked or thrown into parody. The Black Bullets are the real deal. Is this a lifestyle choice?

BT: I personally don’t see us as a sleaze band in the sense of what people expect from that genre. Yes, I grew up listening to such bands as The Dogs D’Amour, Vain and ‪Faster Pussycat, but this barely touches the surface of the overall influences in our band. The Bullets music is purely rock ‘n’ roll and far closer, attitude wise, to punk and grunge. We all have vastly different tastes in music. For example, our latest single When The Devil Comes A-Knockin’ [due for release early summer 2018 through Animal Farm], I wrote the lyrics to accompany a ‪Tom Waits jazz melody. Another of our songs, I had a Pogues tune in my head whilst writing the words, which is quite far removed from the hairspray, spandex wearing cock rockers the label “sleaze” implies. As for lifestyle choice? Drugs and drink were, for sure, fuelling my earlier years on the scene. After all, I only joined a rock band for the party and excess. I almost died last year so the partying in the best part [winks] has had to stop.

AEA: For me, it’s not so much a lifestyle choice as it is an aspect of my interests that I don’t normally get to indulge in. Believe it or not, my favourite bands are ‪McFly, ‪My Chemical Romance and ‪Mindless Self Indulgence – none of those bands would be considered sleaze AT ALL, but they’re all bands who are known for their theatrics on stage. I like being able to embody the “sleaze” onstage, but it’s fun to be able to switch it up and bring in aspects from other genres that you wouldn’t expect to find in that scene as well.

MM: Many would’ve written The Black Bullets off years ago, especially after the Rob Castle and Stevie Pearce incarnation. You’ve proved all the doubters wrong and gone from strength to strength. You got anything to say to the naysayers?

BT: Not really, more fool them. If they don’t like us that’s their problem. We’re not going to waste our time to even think about those people. We do what we love; we’re not here to prove a point. A lot of people had their noses firmly stuck up Rob’s arse for a long time and people didn’t like me replacing him, but hey, he’s the one who walked out on his band, not me. I’ve been in The Bullets longer than Rob and Stevie put together now. Stevie’s got The Hooligans, Rob’s got… well, personally I don’t know what Rob’s got. The names of his bands keep changing so often, but meanwhile I’m still here; I’m surrounded by a band of brothers and sisters. There’s no backstabbers or two faced one-upmanship here, just good times playing, what we think, is good music. And long may that continue.

MM: Alice, you’re a year into life as a Black Bullet. How’s it been?

AEA: Well, we all know the story of how I joined the band; a satanic ritual to summon a demon who was the personification of “malice” but a mangled latin translation brought forth me instead. And with an origin story like that, the only thing that could follow on was pure insanity and sheer awesomeness.

MM: Alice has brought a new dynamic to the band. Would you agree with that, Billy?

BT: Oh, undoubtedly. What it is I can’t put my finger on, which probably is for the best.

MM: The last time I caught The Bullets live must’ve been over 5 years ago. You swung from a chandelier in your hometown as well as diving off the stage splitting your head open on the bar! Are the live shows still that manic and intense?

BT: I’d like to think so. Give me a chandelier and I’ll swing from it! Most venues unfortunately keep such lighting carrots firmly dangled out of my reach from the stage. After a spate of bans from venues in our hometown I had to reign it in for a while [laughs]. These days were are still priddy manic on stage. Our shows are renowned for its energy, but, well, that should be standard. Who wants to see a band who just stand still? I certainly don’t. I don’t care how good you are if your live show is boring. You’ll find me at the bar instead.

MM: You’ve shows lined up with ‪Warrior Soul, Jizzy Pearl’s Love/Hate and Zodiac Mindwarp, among others. Surely you’re giving these “old timers” a run for their money! [laughs]

AEA: You’d be surprised… they’re a lot more lively than you think. I consume an unhealthy amount of energy drinks just to keep up.

BT: I’m just here for a bit of a laugh. To get to play with bands I used to love is merely just a bonus on my journey. Who gives a shit about giving people a run for their money? We are all still running and having a good time doing it. That’s a way better feeling than trying to get one over on other bands.

MM: Latest single Dolls has had almost 35,000 views on YouTube. Is this your best yet? You must be more than happy with the response.

AEA: Yeah, I’m really happy with the response we got from it. We had a lot of fun filming it and I think that shows through in the final product. Sorry Billy, we love you really! I don’t think I wore the most appropriate footwear for killing and dragging a lead singer through the woods though – note to self; next time, do not wear high heels!! Practical flats all the way!

BT: The murder and burial of Billy T? Yeah, proved to be a popular hit, didn’t it? [laughs]. The next video may involve me being hung, drawn and quartered. We expect at least 50,000 for that one!

MM: Can the world expect a full length album at anytime soon or will it be a case of sticking with the single and EP approach going forward?

AEA: Well, I am planning to release my own solo album that consists of me reciting Vogon Poetry to the beat of a tortoise making love to a Croc shoe. However, for The Black Bullets, we’re probably going to stick with EP for the future for now. EP’s give you the chance to keep putting out new music and it keeps it fresh, not just for us as people performing but also for the audience.

BT: Personally, I’d love to release an album; of course I would. I think we all would, and although touring off just EP’s is an easy route, we are managing it just fine so far and the sets stay pretty fresh. For me and my traditionalist ideals, an album is a must at some point but right now, with the ever hungry audiences wanting a quick fix of new music, we’ve instead produced a quick fix EP to keep them interested. Albums take time and money and we have neither. As Carl [founding member and drummer] once said, “If you want a Black Bullets album you can make your own!”

MM: And what’s currently on your turntables?

BT: Right now it’s The ‪Sleaford Mods, a lot of ‪Tom Waits, A.A Bondy, Dax Riggs, Darrell Bath (who we support ‪on Dec 7th with his lot The Crybabys at The Hope and Anchor, Islington), and of course a bit of old school Dolly Parton.

AEA: I’m obsessed with the soundtrack for The Greatest Showman at the moment. I’m also listening to Straight Outta Oz by ‪Todrick Hall and of course, Let It Go from Frozen, which is my anthem and I’m trying to convince Billy to do a cover of it one day. So far, he is resisting my efforts, and surprisingly quite aggressively too, but I think I can wear him down!

MM: Thanks for taking the time out to chat. I always leave the parting shot with the band themselves. Go!

BT: Err… yeah, well… err… cheers Mr. Knievil for having us. We are The Black Bullets and we play rock ‘n’ roll. See you at the front, or so the saying goes – mostly we’ll see you at the back in the shadows with your arms folded quietly nodding your heads. Much love.

AEA: To quote my own personal hero – “The circumstances of one’s birth are irrelevant. It is what you do with the gift of life that determines who you are.” Mewtwo, ‪Pokemon: The First Movie.

Check out The Black Bullets here 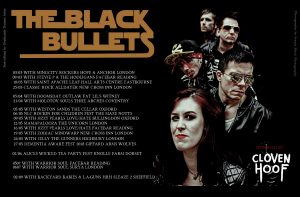