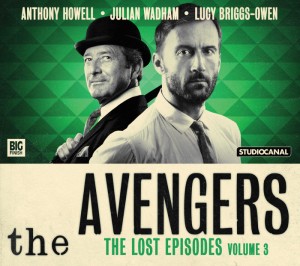 The Avengers: The Lost Episodes Volume 3 – Starring Anthony Howell, Julian Wadham, Lucy Briggs-Owen, Dan Starkey, Miranda Raison, Sarah Lark, Geff Francis, Derek Ezenagu, Maggie Service, Robert Duncan, Jacqueline Boatswain, Peter Barrett, Angus Wright, Jessica Martin, Nicholas Briggs, Philip Pope, Geoffrey Breton, Harriet Hare, Derek Hutchinson, Mark Goldthorp, Written by John Whitney, Geoffrey Bellman, Patrick Campbell, Gerald Verner, Bill Strutton & Adapted by John Dorney – 4xCD / Download (Big Finish Productions)
In the five decades since The Avengers made its television debut, the world has changed exponentially. Its social and moral attitudes evolving beyond the confining bubble that castigated and belittled individuality and difference, the cold war has been consigned to history and technology, and our ever increasing dependence on it, has taken stage in the human struggle. But the one thing that time can never erase or dilute is a good story, and The Avengers thrived, and prided itself, on telling good stories. It may well be fifty years since these tales were first transmitted, but they’re still as exciting and thrilling today as they were when they were originally beamed into the living rooms and lounges of homes around the world.

This latest volume of audio dramas, which recreates missing episodes of the tv series, finds the dynamic duo of John Steed and Doctor David Keel foiling a gang responsible for a series of prison breaks and escapes, preventing an assassination and a coup in an African nation, racing to discover a cache of stolen diamonds before they fall into the hands of the criminal fraternity and breaking up a rather sordid, sleazy, violent and seedy escort business. Each tale is, as you’d expect from adventures that stay true to their source material and the period in which they were born, imbued with a definitive sense of right and wrong and draws an unswerving line between the “goodies” and the “baddies”. From the get go, The Avengers thrives on its attention to detail and a charming, and at times almost innocent, stiff-upper lip integrity that lends it a noir-esque edge as the criminal underworld is given a jolly good thrashing by the secretive and mysterious face of law and order that Steed and Keel represent.

True, it does feel a little dated and for anyone not used to watching sixties style adventure shows ‘The Avengers’ may well seem of its time, especially as far as the dialogue is concerned and the rigidity with which the antiquated gender roles and rules are utilised within each of the stories . That said though, it does reinforce the period feel, as do the fantastic performances from the ensemble cast. I know it’s not a popular thing to say, at least as far as the hardcore fans are concerned, but both Julian Wadham (and I say this with all due respect to Patrick MacNee, because as long as my inner seven year old, the one that adored ‘The New Avengers’, commands my every move, he will always be Steed) and Anthony Howell have truly made the roles of David Keel and John Steed, roles that they inherited, breathing new life into the characters and reviving them for a whole new audience. It’s fast paced, furious sixties fun that doesn’t know how to disappoint its listener, politely insisting that the only way to proceed is with a knockout punch each in every chapter. And that’s just the way I like it… Tim Mass Movement