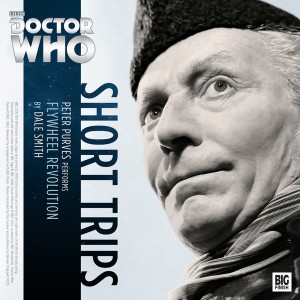 Doctor Who: Short Trips: Flywheel Revolution – Written by Dale Smith & Performed by Peter Purves – Download (Big Finish Productions)
There was always something special about the ‘Short Trips’. The tales of quick jaunts through time and space in the company of The Doctor told by his companions, or more accurately by the actors and actresses who played them, the brief sojourns into the weird, strange and wondrous Universe that he occupies. For a time, a marvellous if brief time, the ‘Short Trips’ enjoyed a life in both print and audio, and then they disappeared from the Who radar; and I, like so many others, believed them gone for good. And following a short period of mourning, I dusted myself down and finally managed to move on. And now they’re back, returned from whichever dimension they were trapped in, and they’ve gone back to the beginning, starting with the First Doctor and a curious story of role reversal on a world inhabited by robots.

Lasting a similar amount of time to a single episode of classic Who, I’ve always felt that ‘Short Trips’ were the Doctor Who equivalent of ‘The Twilight Zone’; and ‘Flywheel Revolution’ only reinforces that belief. In a junkyard (the new series beginning in a tried, trusted and familiar setting) on a planet inhabited by sentient machines, a junkyard where the broken and faulty are sent to live out their lives, a robot called Frankie goes searching to find the monster, a being said to be the scourge of his kind, and stumbles across all that he feared and more than he bargained for when he meets The Doctor. It’s an encounter destined to change Frankie’s life, and the lives of all of his fellow robots, forever as his world and that he thought he knew and understood about his life is turned upside down in an instant.

Dale Smith’s story has a whimsical, fantastical feel that flips the traditional role of The Doctor on its head, casting him in new light as the monster that lurks in the shadows, the thing that must be feared. There’s more than a touch of Ray Bradbury in ‘Flywheel Revolution’, a delightful tale that questions the nature of life, freedom and intelligence and ideas of roles and function in society while championing individuality that’s given an emotional core, soul and felling thanks to the deeply moving and thoughtful narration of Peter Purves. Just remember folks, size isn’t everything… Tim Mass Movement