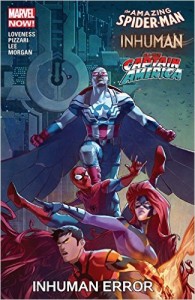 Somebody once said that all of the best stories have already been written and the all of the best tales have already been told, and while I’m of the opinion that what he or she really meant was ‘There’s nothing new under the sun’; there are people who wholeheartedly believe in that sentiment and take it at face value. I’m not just talking about the majority of those who endorse that view and use it as an excuse to forgo the world of literature, there are actually (believe it or not) comic book fans who refuse to read any new books, dwelling entirely in the past and reliving history through their vast collections of four colour stories.  Which is a shame, because they’re missing out on a universe of incredible adventures and tales of wonder that add texture, variation and depth to an ever expanding and evolving mythology. But more to the point, they’re denying themselves the chance to read eye-popping, intoxicating fables like Jeff Loveness’ Inhuman Error.

Okay, let’s get straight to the inevitable bugbear lurking in the corner of the room. There might be a smidgeon of truth in the whole best stories thing, because the plot is more than a little familiar in that New York – or more accurately New Attilan (which although a nation in its own right, presently resides in the Hudson River) – is attacked by a giant floating island and its hideously mutated, human bird hybrid inhabitants. I know, I know, it’s a variation on a theme that dates back to the Fantastic Four’s original clashes with the Mole Man, but let’s face it, most comic book stories do have that air of familiarity, its something that we all (that is fandom), or at least most of us, love about them.  Besides, when it’s spun as well as Loveness spins Inhuman Error, you should just shut up, hand over your money and lose yourself in mind melting art courtesy of Messer’s Pizzari, Lee and Morgan, and the knock down, action packed, slobber-knocker of a yarn that lies at the heart of this book. However, while the aforementioned facets are more than worth the price of admission, the elements that really make Inhuman Error a force to be reckoned with are the characterisation, dialogue and the interaction between the heroes and the “arch-villain” and the way it considers motivational factors, how they tie in with previous events and ultimately, redemption and how men and women, no matter how weird they look, are governed by the rationality of their underlying nature.  It’s all about the way you tell them, and Jeff Loveness is one hell of a storyteller… Tim Mass Movement