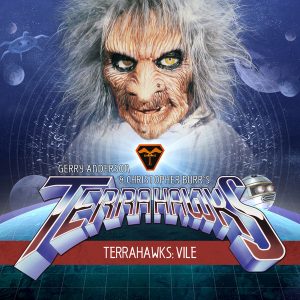 In this latest very short (17 minutes) but free-to-download release from the Big Finish stable Dr ‘Tiger’ Ninestein, he of the literal and metaphorical chiselled jaw, wearer of an extremely dodgy nylon hairpiece, ex-log, and creator and commander of the Terrahawks Earth Defence Squadron, is invited onto a TV talk show hosted by the most depraved, unpleasant and pathetic creature the universe has to offer – the one and only Jeremy Vile.  Tiger’s hopes of settling old scores and negotiating peace with Vile’s other guest, Zelda, Queen of Guk, are soon dashed thanks to Vile’s machinations, but all is not lost as Zelda exposes the truth about our not-so-loveable host.

Ah – the theme tune!  Not heard that for many, many years – but as soon as I pressed ‘play’, I was 12 years old again. And even though the script and music are just as cheesy and as corny as Terrahawks ever was, this is very much a story for our times too. Call it postmodern, or knowing, or maybe it’s just a lazy pastiche – but Jeremy Vile has been on our television screens for over a decade, straight after breakfast television and right before ‘Cash in my Next Door Neighbour’s Attic’ or ‘Menopausal Windbags’, peddling his particular brand of hatred in a modern day arena where people with chaotic lifestyles and cheap leggings are hurled to the lions for our entertainment. He does this every weekday morning, spouting exactly the same clichés every day (‘why don’t you put something on the end of it? being my particular favourite), masterfully whipping up audience hatred / support depending on a whim. I actually think Jeremy Kyle is a Machiavellian totem for today’s society, but mostly he’s just hateful. As is Vile, spouting the same clichés and agitating his audience while putting words into his guests’ mouths.  Poor Sergeant Major. Maybe he shouldn’t be so honest.

So don’t expect this to be complex, or cerebral, though if you’re aware of Terrahawks, you know that this will be anything but. This is a fun way to spend a coffee break or quick journey home from work. And despite being a freebie, I would suggest that if you want people to listen to this, it’s not a good idea to put a photo of Katy Hopkins on the cover…  Bex Ferriday