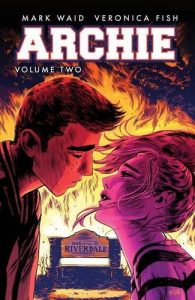 I’ve got a confession to make.  And it goes a little something like this. I arrived at the Archie party a whole lot later than most folks, and while a lot of the eternal youth from Riverdale’s fans have been reading about his mixed up, crazy, and often hilarious life, since they were kids, I’ve only been immersed in his adventures, and those of his friends, for the last half decade or so. Don’t get me wrong, it’s not that I don’t dig Archie, in fact the opposite is true, it’s just that well, to be honest, I don’t know what it is. I don’t know why Archie didn’t find a place on my pull list two decades ago and I don’t know why it took me so long to get around to picking the book up and discovering the amazingly rich tapestry and history of interwoven and connected stories that lie at the heart of Archie. But it did, and because of that, I’ve been doing my damndest to fill the gaps and plug the holes in my who, what, where and how of Riverdale knowledge, although seventy five years of stories is a lot to catch up on, so I figure it’s going to take me a while. Yeah, it’s definitely going to take some time.

All you other tardy Archie attendees need fear not though, as Mark Waid and Veronica Fish’s revamp, relaunch, re-imagining, call it what you will, is the perfect place to start, and having only reached its second volume in trade paperback (or graphic novel if you prefer), now is the perfect time to play catch up in the ready money round with Archie, Jughead, Betty, Veronica and company. Picking up from the last volume left off (and while I’m sure that you, just like I did, will have a ball with Volume One, you don’t need to read it to be able to dive right into Volume Two. It’s advisable that you do, but not strictly necessary), it’s the boy meets girl, although perhaps not the right girl, story of love, heartbreak, unrequited desire, misunderstandings involving ex-partners, miscommunication, failed and foiled political ambitions and throwing a spanner or two in the machinations and plans of  a would-be foe and life-long adversary. It’s a story of the green clawed beast rearing its ugly head, of people doing their best to fit in where they know they don’t belong, of the inevitable moment when the thread suspending the Sword of Damocles snaps and the blade descends, destroying everything in its path and of the devastation it leaves in its wake. Mark Waid’s superb characterisation, natural, flowing dialogue and involving plot, makes Archie Volume Two instantly relatable to all and sundry, because we’ve all been there, experienced something similar or know someone who ‘s lived through this kind of drama. Both the teenagers and adults in Archie are fully formed, three dimensional players who have hopes, dreams and aspirations, which strangely for a comic, gives the whole book a sense of realism and grounds it in the everyday world that its readers know all too well.  And thanks to the supremely talented Veronica Fish, Thomas Pitilli and Ryan Jampole, Archie Volume Two looks every single bit as good as it reads. Which is, you know, pretty darn awesome. Most folks will tell you that they want to live on a desert island, or retire to idyllic country retreat, but after reading Archie Volume Two I know exactly where I want to spend the rest of my days. I want to live in Riverdale… Tim Cundle