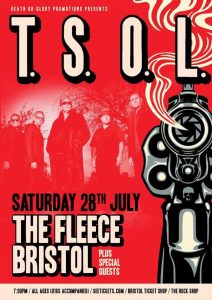 GR: Hello. We are Tenplusone. We are a 3 piece punk rock band from South Wales. There is myself on guitar and vocals, Duncan on drums and vocals, and Dai on bass… strictly no vocals! [laughs]

MM: The band has been going for 11 years but we’re only now seeing your debut album. If my maths are right, that’s 10+1 years! Was this all part of the Tenplusone masterplan? [laughs]

GR: [laughs] No, it wasn’t planned that way at first. We planned to get this album out for a long time, but it always seemed things got in the way. Band members would leave and general life crap got in the way, but we have been settled with the three of us for a while now and this has lead to new songs being written and older songs being changed. The band just feels complete now. It was kinda cool when we realised we were in the 11th year though so we thought we would roll with it [laughs]

MM: Dai has been part of the fold for a while now. What’s it like having a stalwart of South Wales punk in your ranks?

GR: Dai is a great guy. He loves this band as much as myself and Duncan and when he joined it was the missing link the band needed in my opinion. He’s as much part of this band as any of us now.

MM: I’ve had the (dis)pleasure of working with him. He’s not half bad on the bass, is he? He even goes up the the dusty end of the fretboard! How did the band dynamics change since his arrival?

GR: Oh, he is a one hell of a bass player, which helps me a lot. The dynamics changed for the better, definitely. I can concentrate on keeping my playing simple while I sing knowing that he has the melody covered, and I can blast out a decent solo or melody part knowing he has the rhythm sorted.

MM: With regards to the debut album, it’s only been out a matter of weeks but the response has been more than positive already. You must be well happy, right?

GR: I am. It’s been really nice and humbling to hear people’s reactions to it. Everything on the album is written from a personal point of view or experience of mine, so to have people accept my whinging as good listening makes me very happy! [laughs]

MM: How does the songwriting process work within the band? Is it something you all have a hand in?

GR: Well, it’s changed a lot for the better. It used to always be me who wrote all of Tenplusone’s songs, but Dai has brought quite a few songs to us. And that’s been good for me; it’s kept it fresh and exciting. In fact, the next album will be half written by him and half by me… actually it may be more his writing!

MM: Who would you say are your five big musical influences?

GR: Ooh, my five big musical influences? That’s a tough one. They aren’t particularly “out there” or unusual but it’s what I grew up with, so in no particular order I would have to say Pennywise, Green Day, Nirvana, Therapy? And China Drum.

MM: And what about outside of music, what floats your boat?

GR: I have quite a simple life and I’m a simple guy. Other than music I only have three other loves: family, motorcycles, tattoos.

MM: I see you’re on the bill for the T.S.O.L. show in Bristol at the end of this month. Anything else in the live pipeline?

GR: Yes, T.S.O.L. is very exciting for us. We can’t wait for that. We have quite a bit coming up, with new gigs added all the time. We have some pretty good support slots soon. Follow us on Facebook [link below] and we can keep you all updated.

MM: Thanks for taking the time to chat, Gareth. It’s really appreciated. The parting words for the Mass Movement readers are all yours. GO!

GR: Thank you for asking me. My parting words are very simple. Everyone just be kind to each other. We are here for a good time, not a long time. Oh, and buy our album!

Tenplusone’s self titled debut album is out now. Get it here

Keep up to date with the band on Facebook here