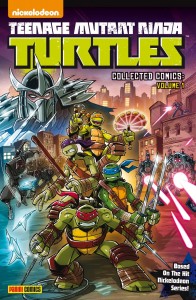 Teenage Mutant Ninja Turtles: Collected Comics Volume 1 (Panini Comics)
You know what; I completely missed out on the Turtles thing when I was growing up. The original comics, the films, the toys, the whole kit and caboodle, it all passed me by. Maybe it’s an age thing, maybe it’s because by the time they sprang from the sewer I was too interested in ladies and beer or maybe I was just too absorbed in other things to notice them, but whatever the reason was (and I’m sure it was a good reason), the global phenomena inspired and created by the quartet of pizza loving mutated chelonii and their rodent sensei barely made an impression on me. Until now.

‘Collected Comics’ is my first real contact with the adventures of the ‘hero’s in a half-shell’, and while it isn’t, and wasn’t, a life changing experience it was an enjoyable way to spend an afternoon, immersed in their mad-cap, weird world. Each story rattles along at frantic pace, pitching the turtles into battle with a whole host of robotic enemies, mad scientists, fish faced foes and the legions of Shredder, and when they’re not fighting to prevent their ever growing list of adversaries achieving their nefarious goals, they’re trying to extricate themselves from a seemingly never ending series of self-induced mishaps. There’s very little room for characterisation and there are no slow building, all consuming story arcs, but I suspect that’s not the point of the Turtles. These dudes (to use the correct idiom and proper vernacular) are all about looking good, kicking ass and having a great time while doing both, and the book mirrors their life philosophy perfectly. It looks good and it’s a snappy and oddly involving read that overcomes any and all resistance with its overwhelmingly infectious sense of fun. It’s like, you know, cool… Tim Mass Movement