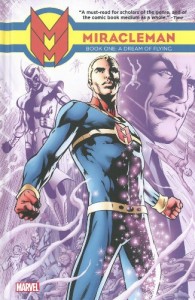 Miracleman Book One: A Dream of Flying – The Original Writer, Mick Anglo, Garry Leach, Alan Davis, Don Lawrence, Steve Dillon & Paul Leary (Marvel / Panini)
Trapped in legal hell for more than a decade and a half due to ownership battles and print rights, ‘Miracleman’, formerly known as ‘Marvelman’, was (and is) the eighties revival of Mick Anglo’s fifties comic, originally brought back to life by an incredibly well known, much loved and respected comics writer who, for a variety of reasons no longer wishes to be associated with the title. A title whose behind the scenes drama long threatened to eclipse its place in the annals of comic history. ‘Miracleman’ has assumed a near mythical status in the four colour universe, especially among those (yours truly included) who weren’t fortunate, enough to have immersed themselves in his ongoing adventures when they first saw the light of day. Like all forbidden fruit, lack of (affordable) availability added a sense of awe to the books reputation and the longer the real world battles raged; the more said reputation grew and grew until it became a thing of legend and wonder. But the problem with fame is that all too often, it’s fleeting. Especially if it’s been built on a foundation of hearsay and rumour, and many are the films, records and books whose mystery has been shattered by their re-emergence. ‘Miracleman’ however, doesn’t suffer from that particular problem, and if anything was undersold by fandom, and this long awaited and overdue re-print has finally assured that it’ll assume its rightful, and deserved, place at the forefront of the comics food chain.

The story tells of a burned out journalist who discovers that he was once a hero whom no-one – including himself – remembers. ‘Miracleman’ pitches its antagonist into a hitherto unseen world of super-powers, villains, friends and foes, military intelligence, arms-race powered super-soldier programmes and a past that doesn’t exist. It gradually takes the concept and the idea of the super-hero apart, piece by piece, before reassembling it in a cold war thriller that holds dear to the belief that every generation gets the hero they deserve rather than the one they desire. Michael’s dreams of flying and soaring through the sky eventually end with him discovering his alter-ego, which in turn leads him to try and uncover the truth about himself, Miracleman and his newly remembered team mates, Young Miracleman and Kid Miracleman. Sometimes though, you’re better off not knowing the truth, as Michael’s quest brings him into conflict with an old friend he didn’t know he had and as he stumbles across the origin of Miracleman and the powers behind it, shatters everything he thought he knew, and every ideal he believed in. Curiosity killed the cat, and once the Djinn are out of the bottle, it very rarely, if ever, goes back in as Michael and his genie reluctantly learn.

The Original Writer’s (yes, yes, we all know who he is) dissection of populist comic mythology and the concepts that it builds its hero’s around was, and still is, a game-changing tale that explores and questions mortality, the perception of self, duality of being and evolution, and how god-like power ultimately transforms men into the beings they once praised and placed their faith in. ‘Miracleman’ epitomises the struggle that exists between the individual and authority, continually lambasting the latter, seeing it as the ultimate power that corrupts absolutely, willing to use and destroy anything and everything it can in order to maintain the status quo, while praising and celebrating the former, endorsing it as the embodiment of freedom and autonomy. It’s a book that climbs to dizzying heights, which thanks to its incredibly potent combination of Leach and Davis’ art and the Original Writers story, it never descends from. The age of miracles has arrived… Tim Mass Movement