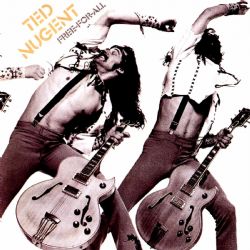 Ted Nugent – Free For All: Expanded Edition CD (HNE Recordings/Cherry Red)
The Motor City Madman’s second album sounds as good now as it day the day I first heard it – but not quite 1976 (the original release date). Ted’s filthy pounding guitar, along with his highly noticeable vocal twang was only ever created to embed itself deep within the listener’s cranium; to hit the parts other weaker-assed replicas desperately tried to reach. With the album title track there is no holding back, reckless fret board antics and lyrics that epitomise the rock ‘n’ roll genre, the Nuge was already starting to ruffle some feathers. ‘Dog Eat Dog’ is as dirty as it sounds, yet cultivates a chorus, which will forever be memorable to those who have heard it. The paced vibe of ‘Hammerdown’ was incredibly fast for it’s day, and even now will stand the test of time. With ‘Free For All’ Ted had certainly created a ruckus and aptly titled this (to be) platinum release. The three bonus tracks ‘Free For All’ and ‘Dog Eat Dog’ both live, add a nice touch with Ted’s on stage un-PC banter, and the alternative version of ‘Street Rats’ completed by original vocalist Derek St Holmes add a little extra something these re-boots are in need of, not a necessity, but a great sweetener; and along with a thorough and in depth booklet of notes from Malcolm Dome this will be great nostalgia for some, whilst highly educational for any new comers. Mark Freebase