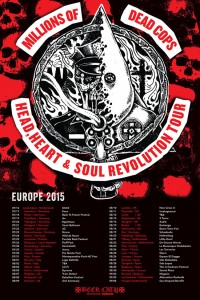 MDC ‘Head , Heart & Soul Revolution Euro tour 2015’ begins in a few days! MDC will be on the road doing no less then 44 days in 12 different countries.

You can get all the official MDC vinyl and cds as well as tee shirts and stickers at your local record store , tons of online stores. Including our online store and itunes ! Stores get it from Independent Label Distribution!

A high res printable version of the tour poster can be downloaded here!

About MDC
M.D.C. is a musical and political organization always striving to make intelligent, powerful, political statements that scream loudly against political insanity and social malignancy, addressing oppression and the human condition.M.D.C. undoubtedly influenced many bands of today, evident in many modern anti-government and anti-oppression oriented groups, as early American Punk folklore blazoned its course through the past 35 years. M.D.C. was on the cover of the FIRST issue of Maximum Rock’n’Roll, which also includes a band interview .They have had major articles in Playboy, Spin, Sounds. As an integral part of early American Punk folklore, it is not surprising to find references to M.D.C. in the annals of punk history and beyond the boundaries of mainstream music culture–their honorable mention in the alternative duo They Might Be Giants’ song “Rhythm Section Want Ad” and the “Millions of Dead Cops” album ranking #7 on Kurt Cobain’s all-time favorite list are two interesting examples. M.D.C. forged strong friendships and allies through their years of touring such as The Dead Kennedys, Bad Brains, Ian McKay of Minor Threat, Tim Armstrong and Matt Freeman of Rancid, Green Day, and Dave Grohl, to name a few. M.D.C. is active in a number of good causes and have continually campaigned with their best efforts in the furtherance of a better world. As of 2015, Millions of Dead Cops, a.k.a. M.D.C., is comprised of two original members, Dave Dictor on vocals and Ron “x-con ron” Posner on guitar, along with “Mad Mike” Smith (Brother Spud, No Red Flags) on bass and Jesse Cobb (Valid Effort, Embrace The Kill) on drums.