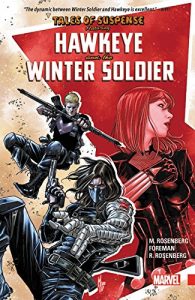 Tales of Suspense was originally a Marvel anthology series that ran for a decade or so during the Silver Age of Comics. While it survived the journey from the fifties to the sixties, it didn’t quite make it to the seventies and despite the occasional attempt to revive it, it’s never been anything other than a one shot curio for the last half century. Or at least it wasn’t until Matthew Rosenberg was given the unenviable task of reviving the recently deceased Black Widow in a believable (for comics) and original story that would allow fandom to release a collective sigh and rejoice in the fact that Natasha was back. Yeah, I know what you’re going to say, death is never forever in the four colour universe and believe me, I’ve used that phrase more than a few times myself, so I know exactly where you’re coming from. But there’s only so many times that you can use a Universe altering paradigm, magical get out of limbo free card, technologically impossible time bullet or hideously complicated McGuffin to restore a beloved character to the land of the living before  you shred the very last nerves of a readership that’s already balanced on an incredibly fragile camel’s back. Like I said, it was an unenviable job, but luckily it was given to the right man as the Hannibal Smith of the Marvel Universe, Matthew Rosenberg, was, and is, a Black Widow fan and if anyone could restore Natasha to her rightful place in a post Secret Empire world, it’s him.

Being intimately familiar with the history of the character, Rosenberg elected to go back to basics for Hawkeye and the Winter Soldier, and in doing so crafted a character driven, slow burn, cold war  thriller that thrives on an undercurrent of espionage, quick bursts of insanely brutal violence and the divergent points of view of its main players, Clint Barton and James “Bucky” Barnes.  Following a series of precise, impeccably executed assassinations, Barnes and Barton separately reach the conclusion that the Widow is still alive, and while attempting to track her down are thrown together in their dogged pursuit of the woman who meant, and means, the world to both of them. As their suspicions are inevitably proved to be right, albeit in a wonderfully creative manner that draws extensively on Natasha’s past, Clint and Bucky are immersed in a maelstrom of spy shenanigans and plots within plots that are buried in more secretive, deeper plots that push them to the limits to their abilities as they attempt to save their old friend from those who do her harm, those who seek to “help” her and ultimately, from herself.

Given the sort of rapid fire, detailed and intricate life that ensures every panel pops off the page by the well-honed and hideously talented team of Travel Foreman and Rachelle Rosenberg, Hawkeye and the Winter Soldier admirably fulfils its mission parameters and, if I’m honest, thanks to the lightning fast, turns on a dime plot, knock out characterisation and slick, on point dialogue is probably one of my favourite books of the last year.  How could it not be? Rosenberg brought Natasha back and transformed her from a bad ass killing machine into a one woman army with purpose and a goal that could change the face of the Marvel Universe forever.  The female of the species really is more deadly than the male… Tim Cundle