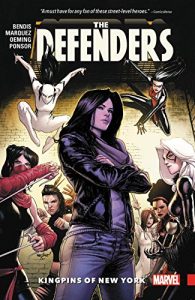 So this is it, the culmination of Brian Michael Bendis, David Marquez and Justin Ponsor’s run on The Defenders. And you know what they say about going out with a bang? That’s exactly what the powerhouse trio do in Kingpins of New York. They throw everything that they possibly can at the plot, supercharge the characters and action and let the events that they’d preciously set in motion  race toward their natural, by occasionally prodding them with a big super  powered stick, conclusion.

The plot is fairly straight forward, but it’s one that Bendis has a tremendous fun with, as it finds Danny, Luke, Jessica and Daredevil squaring up against and going toe with an impossibly powerful Diamondback, the recently escaped from custody, would be Kingpin of New York. Along the way, they tangle and “tango” with Frank Castle and in their ongoing struggle, find a new ally who thanks to a recent, near encounter with the Grim Reaper undergoes a life altering change in career and outlook and decides to swap sides and join the good guys. But that’s not all folks, as the real power behind the “Kingpin” is revealed, and as one boss falls another rises to take his place, which throws the Defenders straight back into the fight. And fight they do, from beginning to end, calling in old favours to turn the tide of the battle in their favour and taking back the streets of New York the only way they know how. In bone crunching, sinew snapping, guns blazing, fists and feet flying action. In other words, they do it the Defenders way.

Some books, from the first panel to the last page, are an absolute joy and a pleasure to read and Kingpins of New York is one of them.  The passion, enthusiasm and delight that the creative team felt in bringing the Defenders to life is evident in every line of incredible dialogue, every shift in the stories direction and every mind-blowingly detailed illustration that fills the pages of Kingpins of New York. Which is probably why it zips along at a tremendous pace, leaves you with a feeling of immense satisfaction and despite reaching a solid and suitable conclusion, green lights the possibility of another creative team stepping into the breach and continuing the story that they started and possibly ended.  You don’t want to read this book, you need to read it. New York, it’s a hell of a  town…  Tim Cundle