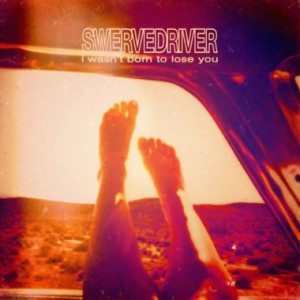 Swervedriver – I Wasn’t Born To Lose You CD (Cherry Red)
I wouldn’t say that I used to be a big fan of Swervedriver “back in the day”, but I remember going to see them in 1991 or so, and songs like “Son Of Mustang Ford” got a lot of airplay at the time Swervedriver were an interesting bridge between the UK shoegaze bands and US alternative rock. The shoegaze movement was exemplified by bands like Ride or My Bloody Valentine, where poppy introspective tunes were wrapped in swathes of guitars, with the vocals buried deep in the mix instead of being up front. Swervedriver blended this with the more rocking sounds of bands like Husker Du and forged their own unique style. They could have been massive but somehow the mainstream passed them by and eventually they disappeared from my radar until this brand new reunion album. These things are always risky, often a band gets back together, has a blast playing the old material to delighted fans and then think what next? A comeback album is a real hit or miss affair and can really tarnish a band’s name if not done right. Fortunately on here, Swervedriver have done everything right. They’ve managed to recapture that blend of guitars, vocals, fuzz and repetition that they used to do so well. The style is instantly recognisable, even when they stray from the path from time to time such as the Beatles-esque “Setting Sun” or the grungey “Red Queens Arms Race”. This record is in fact a vibrant modern record that showcases the timelessness of certain musical styles. Welcome back. Tom Chapman