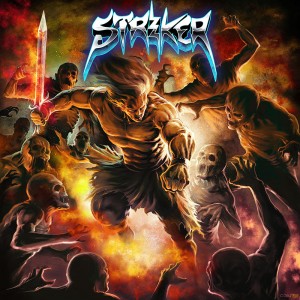 ‘STAND IN THE FIRE’ TO BE RELEASED FEBRUARY 2016
Bringing the heavy metal thunder direct to the fans with exciting pre-order campaign!

Canadian metallers STRIKER are ready to set out on a new adventure with ‘Stand In The Fire’ being released via their own Record Breaking Records label on February 5th.

The single ‘Too Late’ will be a free download from 20th November
Check out the video here of the band giving details of the album and pre-order, which will be running from November 13th to December 10th, and gives fans the chance to pick cover songs, set up special Keg Party shows and skate decks, along with limited edition artwork and merch options (who doesn’t love a belt buckle that you can open a beer on!).

Stand In The Fire is Strikers most uncompromising record to date. A record packed with incredible riffs and colossal anthems, all laced together with epic harmonies. Inspired by legendary bands like Iron Maiden, Striker wears their hearts firmly on their denim jackets, soaking up the power and influences of classic rock and metal.

The band; Dan Clearly (vocals) Tim Brown (lead/rhythm guitars) William Wallace (bass) Adam Brown (drums) recorded the album themselves with the help of Randy Black (who filled in on drums while Adam was away…) and mixing genius Frederik Nordstrom (Bring Me The Horizon, In Flames, Opeth)giving them not only the time and space needed but the freedom to set up the release direct to fans worldwide. “We’re so excited about having our music, our ideas, and our future in our own hands – ushering in a new era for the band of decisive action, dedication and forward thinking. Live life by one rule: No Limits!” – Tim Brown
STRIKER ON TOUR
Hitting the road with Primal Fear across Europe in February 2016. More dates to follow including the UK.
05.02 Barcelona | Razz 2
06.02 Madrid | Arena
07.02 Murcia | Garaje
10.02 Paris | Divan Du Monde
11.02 Siegburg | Kubana
12.02 Prague | Nove Chelmice
13.02 Cham | L.A. Café
14.02 Hamburg | Logo
16.02 Hannover | Musikzentrum
17.02 Saarbrücken | Garage
18.02 Stuttgart | LKA
19.02 Pratteln | Z7
20.02 München | HM’s Calling
21.02 Budapest | Barba Negra
23.02 Wien | Szene
24.02 Cracov | tba
25.02 Berlin | K17
26.02 Würzburg | Posthalle
27.02 Essen | Turock
28.02 Vosselaar | Biebob
STRIKER formed in Edmonton, Canada in 2007 and they were signed to German label Iron Kodex off the strength of their first demo. They made two albums with the label and recorded second album Armed to the Teeth with acclaimed producer Michael Wagener (Ozzy, Skid Row, Metallica). They played shows with Metallica in Canada and hit the road for what eventually became a full world tour with shows across Europe and Japan. They used their time in Europe to work with Frederik Nordstrom and were snapped up by Napalm Records in 2012 for the released of the acclaimed album City of Gold.
www.striker-metal.com for all info on the pre-order, tours and news

Also visit Facebook/strikermetal | @StrikerMetal for photos
of people drinking beer, headbanging and all round rifflording! 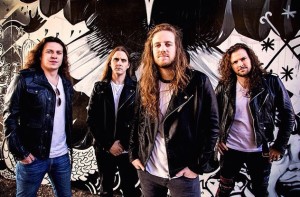