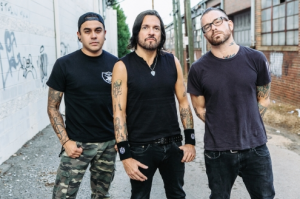 ‘X – No Absolutes’ is Prong, (who were formed nigh on 30 years ago by guitarist and vocalist Tommy Victor in 1986), at their very best. The sheer intensity and ferocity of the album’s opening triumvirate ‘Ultimate Authority’, ‘Sense Of Ease’ and ‘Without Words’ leaves the listener gasping for air. The title track is crunchy and catchy at the same time, while ‘Do Nothing’ may be as close as you will ever hear Prong get to a ballad and shows the enormous progress and confidence Victor has made vocally. It is hard to find a weak spot here; notably Victor mentions that “Sequencing the album was a difficult task; every song is so strong in its own way”. Again produced by Tommy Victor, this time with trusted collaborator Chris Collier as co-producer and engineer, “X – No Absolutes”, which is packed with the band’s trademark driving riffs and pinpoint-precise grooves, also broadens the horizon sonically.

Tommy states that “Prong is excited about the upcoming release of our tenth studio release of new material, ‘X – No Absolutes’. It seems as though our recent records keep getting better and this new recording definitely appears to be a testament to this. Prong has maintained aggression while tackling the challenge of creating classic songs and anthems in the past, but we have gone even a step further with this mentality on ‘No Absolutes’. Here you will find a collection of riff intensified crushers, furious barn burners, and fist pumping sing-a-longs. Also, this record exhibits even more technical proficiency, showing progress again on all fronts. We feel the listener needs to be excited about every lyric, performance, sound, etc. for the duration of the record. This record throws a powerful punch, yet we feel it to be memorable and in demand of future listens with its energy, strong production and overall catchiness. Our themes on this record will certainly inspire some thought. Whether it be a dose of self-discovery, a dialogue of a personal challenge or a viscous finger pointing at what we believe to be a falsehood, those attentive to messages and lyrics in general will be supplied. And we feel they will be compelled to shout aloud with, mimic a riff, sing along or cry out in pain with ‘Prong X – No Absolutes’!”

Just days after the mixing of ‘X – No Absolutes’ was completed, Prong went on the road with Danzig and SuperJoint Ritual in North America and released the first single from the album, ‘Ultimate Authority’ on 2nd October, the day the tour began.