Warning: preg_match() expects parameter 2 to be string, object given in /var/www/vip4/sites/vip6102689/httpd/htdocs/wp-includes/formatting.php on line 4866
 STEVE‘N’SEAGULLS ‘Barnyard boogiemen’ from Finland return to the UK in September - Mass Movement
x
Spread the love 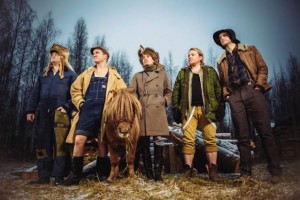 Steve ‘N’ Seagulls, following their recent UK tour return in September to bring their unique bluegrass style to the London Acoustic Show for two shows. Held at London’s Olympia’s Conference Centre on September 12th and 13th, the Finnish bluegrass folksters will appear on both days, for two main stage performances and a meet-and-greet to celebrate the release of their debut album Farm Machine.

Steve’N’Seagulls also get their Iron Maiden on with their latest cover a rousing folked out version of Maiden’s ‘Run To The Hills’ https://www.youtube.com/watch?v=8jGAfzrdpxo

Less than a year ago Finnish hicks Steve ‘N’ Seagulls broke through with their extraordinary version of the AC/DC classic “Thunderstruck” on YouTube, turning the hard rock classic into skiffle playing instruments including saws and hammers and gaining over 12 million views: https://www.youtube.com/watch?v=e4Ao-iNPPUc

After having hillbillified further rock classics, the country cousins signed a recording deal with Spinefarm Records/Universal Music and in less than 12 months they’ve recorded their debut album, Farm Machine and whipped up a huge worldwide following already prior to album release.

The 13 song album, Farm Machine released on May 11 entered the BillBoard Bluegrass Album Chart on position #3.Not only that, the album also appears on BillBoard’s New Artist and Independent Charts.

S’N’S comprises an acoustic guitarist/vocalist; a banjo player; a double-bassist; a big dude wearing overalls and a beaver hat playing mandolin/keyboards/accordion/whatever-he-gets-his hands-on; and a cajon-straddlin’ percussionist – and they have delivered a 13-track album featuring rural riffs and villager vocals, filled to the brim with “hillbillified” versions of immortal heavy metal standards including Iron Maiden’s ‘The Trooper’, Guns N’ Roses’ ‘Paradise City’ and Metallica’s ‘Seek And Destroy’ among others.

As foot-stompingly enjoyable as S’N’S are on record, you haven’t seen anything until you’ve experienced them live.
Let the hillbillification commence in London on September 12 and 13!