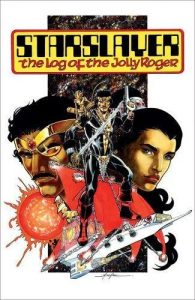 My comic collection had been sold a few years by the time Starslayer: Log Of The Jolly Roger hit the stands, back in ’82.  I just wasn’t buying them anymore. Nonetheless, when I first clapped eyes on Mike Grell’s new scripted and drawn venture – one of the first independent comics of its kind – I was intrigued enough to read it (though whether I actually paid to do so is, cough, lost in the mists of time). It wasn’t that I particularly liked Mike Grell; familiar with his work from Superboy And The Legion Of Super Heroes and The Phantom Stranger, among other titles, if anything I found his style … unbalanced. He drew a superb female form but his males always seemed oddly elongated, appearing a mite ‘bad fanzine-y cover’ in their anatomy, which always seemed to jar me out of the rest of the imagined reality on the page.

Such was the case with Starslayer – the book’s heroine, Tamra, was formed – and, I must say, garbed – pleasingly indeed, while Starslayer himself appeared once more to have spent too many hours being stretched on some mediaeval rack. But in the issues I read, such bodily oddities soon paled against the mad as a box of frogs storyline that unfolded alongside. In a nutshell, Celtic warrior Torin Mac Quillan is about to die by leaping onto the pointy ends of a good number of Roman spears when he is teleported into the distant future and the bridge of a space-going pirate galleon called, you guessed it, the Jolly Roger. Tamra has brought him hereto because obviously only a near naked primitive from long ago has any hope of standing against a corrupt corporation armed with highly-advanced weaponry and fuck knows what. Our hero Torin, meanwhile – looking like a cross between Sean Connery’s Zed in Zardoz and Thomas Magnum in, well, Magnum (P.I. for the pedants) – has only a robot called S.A.M. and a sword made devastating by his own Kirlian aura to aid him. Yes, I know what you’re thinking.

But you know what? Starslayer is good. Bloody good. If you stick with it, the box of frogs’ manic croaks start to make sense. There’s a reason why the Jolly Roger looks like it does; there’s a reason Torin has to search out a number of amulets from the ‘Lords’ of the Solar System; there’s a reason why Tamra chose him; and there’s an absolutely fantastic denouement about which all I will say is syzygy.

Starslayer lasted for thirty four issues, and in this collection we get the first eight, by the end of which not only had Grell transferred the title from original publisher Pacific Comics to First Comics, but he himself had handed over both scripting and art to others. The eight issues here are, however, the ‘Director’s Cut’ and therefore the definitive Grell version of his universe. Book-ended by intros from future writers John Ostrander and Timothy Truman, and a biog of Grell and gallery of his original black-and-white artwork, trust me, it’s well worth a flight on the Bowsprit. The what? Oh, just wait and see. Mike Wild