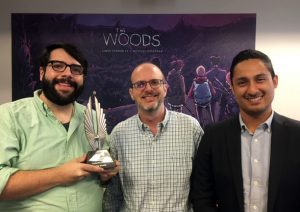 The GLAAD Media Awards recognize and honor media for their fair, accurate and inclusive representations of the lesbian, gay, bisexual, transgender, and queer (LGBTQ) community and the issues that affect their lives. The Awards also fund GLAAD’s work to amplify stories from the LGBTQ community that build support for equality. The Outstanding Comic Book award was officially presented to James Tynion IV, representing the series’ creative team, at the BOOM! Studios office in Los Angeles.

“Honestly, this award means the world,” says Tynion IV. “When I was reading comics in high school, it felt like I couldn’t find any stories that represented my life or my struggles. I was a young man, looking to fiction to find a path for myself and queerness was always just subtext, punchline, or fleeting. I made a promise to myself then that when I become a comic book writer, I wouldn’t do that. I would put the queer characters up front and center with the rest. Not necessarily to tell stories about their queerness, but to show that I existed as a part of the same world as my straight peers. To make sure that the high school James of today can find stories that speak to him on the comic shelf.

“To win this award for the series that I believe is the purest expression of myself is one of the greatest honors of my young life.”

“This award means everything to me and I’m very honored to have our colorful space adventure recognized among the other amazing and high-caliber titles in the Outstanding Comic Book category,” adds Dialynas.

Debuting in 2014, The Woods follows the journey of 437 students, 52 teachers, and 24 additional staff from Bay Point Preparatory High School in suburban Milwaukee, WI who vanished without a trace. Countless light years away, far outside the bounds of the charted universe, 513 people find themselves in the middle of an ancient, primordial wilderness. Where are they? Why are they there? The answers will prove stranger than anyone could possibly imagine. The series wraps up its ambitious three-year storyline in full this October with the release of The Woods #36. The series has consistently received critical acclaim for its diverse representation of LGBTQ youth among its core lead characters—including Ben, Isaac, Sander, and Sanani—and an equally vibrant supporting cast.

For more on The Woods and more from BOOM! Studios, please visit www.boom-studios.com and follow @boomstudios on Twitter. Print copies of The Woods are available for sale at local comic book shops and bookstores, and digital copies are available from content providers like comiXology, iTunes, and Google Play.