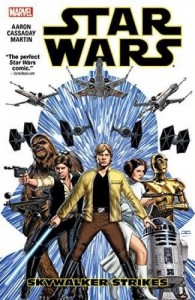 I still remember as though it was only yesterday, the first time I read the sentence that would change my life forever. I can still remember the electricity that flowed through every cell in my body, the tingles it sent down my spine and the way the miniscule hairs on the back of my arms stood up as the charge flowed through them.  It was the opening volley of a film that inspired a generation, and continues to inspire the generations that followed us, the ’77 originals. That sentence was, of course, “A long time ago, in a galaxy far, far away…”  Nothing, except maybe Doctor Who, has captured my imagination in quite the same way that ‘Star Wars’ did, and nothing related to the franchise has managed to do so since the end of ‘Return of the Jedi’. Or, more accurately, nothing had done so until Marvel started publishing Star Wars comics again and the electricity began to flow again. All the wrongs done to the Star Wars Universe (mainly by the ill-conceived and woefully realised prequels) began to slowly right themselves and harmony was restored to the Force.  And Jason Aaron’s ‘Star Wars’ was the foundation upon which this glorious return to form was established.

“Skywalker Strikes”, the first collected edition, takes place following the events of ‘Star Wars’ but precedes ‘The Empire Strikes Back’, and finds Luke, Leia, Han, Chewie and the droids on a devil-may-care mission to destroy an Imperial munitions complex in Corellian space.  As with everything that they do, all goes swimmingly until Vader turns up and all hell breaks loose and their carefully planned escape becomes a magnificent action filled free-for-all involving stolen AT-AT’s, speeder bikes, freed prisoners and a rampaging Lord of the Sith. Then, just as things begin to get back to some sort of normality, Luke suffers an identity crisis and sets out to discover the path to becoming a Jedi by returning to Tatooine in an effort to find out more about Obi-Wan. Which brings him into Boba Fett’s crosshairs, who in turn, has been hired by Vader (and sharing a story-arc with the first volume of the Darth Vader spin-off, ‘Vader’) to bring him the pilot who destroyed the Death Star. Meanwhile, Leia has persuaded Han to join her on another of her “insane” operations in exchange for the spare parts that he needs to fix the Falcon, but it’s an outing that neither of them is ever likely to forget as they end up “bumping” into a face from Solo’s past that he’d rather forget.  Exhilarating and exciting, Aaron’s story is matched only by the incredible detail of John Cassaday’s art, which when combined, encapsulate everything that is wonderful, and I’ve always loved, about Star Wars. Like Luke before them, Aaron and Cassaday just hit the bullseye. And they didn’t need to fly through Beggar’s Canyon or use a targeting computer to do it. Tim Mass Movement