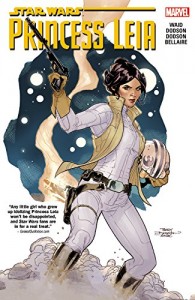 I’ve never been a monarchist. The idea of royalty and all its trappings, for as long as I can remember at least, has always seemed like a quaint way of clinging to the past and a forlorn way of longing for the return of the days of Empire. However, Princess Leia was always more of a Princess in title only, as losing her world in the first half of ‘Star Wars’ and her willingness to get stuck into the thick of battle separated her from the traditional idea of what a Princes should be. In fact, she was probably the first gun toting, arse kicking female hero, one who could easily go to toe-to-toe with any of her male counterparts, who I was exposed to. She set the bar pretty high, so it was more than a little pleasing to see her back in action, and leaping and bounding over said bar in ‘Princess Leia’.

Set in the immediate aftermath of ‘Star Wars’ (I’m not going to call it ‘A New Hope’, that’s just not going to happen) and when I say immediate I mean five minutes after the ceremony in which Leia presented Han and Luke with their medals, ‘Princess Leia’ is the story of how our hero comes to terms with the destruction of Alderaan and how she sets out to save the remnants of her people.  In it she – along with her new “best friend” and former subject, Evaan (a rebel pilot) – travels from one side of the galaxy to the other in a desperate race to rescue her surviving subjects and what’s left of her culture before the Empire can obliterate every last trace of Alderaan.  Filled with treachery, mistrust betrayal and hope, ‘Princess Leia’ is about how Leia comes to terms with who she was, is and will be, the misconception of position and how the roles that fate decrees we should play are, more often than not, rejected in favour of who we want to be. Mark Waid’s story is lightning quick, filled to bursting with well-rounded and intelligent characters and not only spins an engaging yarn, but also explores a number of astute social, gender and race issues within the confines of the ‘Star Wars’ universe, while Terry Dodson’s art captures the imagination and magic of the original trilogy perfectly. And you know what? It’s fantastic… Tim Mass Movement