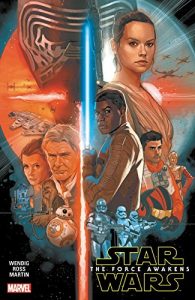 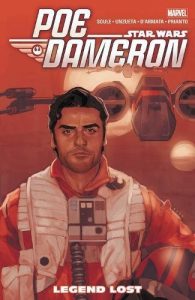 It appears that over the last three years, we have a new Christmas tradition. Thanks to the House of Mouse buying up Mr Lucas and co’s prized possession, we have more than mince pies and Muppets Christmas Carol to get excited about when that most wonderful time of the year rolls around again in December.  Yup, the twelfth month is now nowt to do with tinsel and tat and the likes in our house any more, nope, it’s new Star wars film month! Red letter day on the calendar and everything! Two years ago then, when I traipsed off to the pictures in giddy excitement and with fingers crossed that The Force Awakens would send us all gag rather than foist upon us a Jar Jar, I returned home wildly excited. It was a cracker. Sort of a reboot for the next generation, the kids of Star Wars Dads, this new film contained 21st century updates of the wondrous world which the first three films had in abundance. I think it’s fair to say that this graphic novel adaptation of The Force Awakens is not gonna be picked up by anyone who hasn’t seen the movie, so I don’t really feel spoiling the plot is such a worry. The strictly embargoed (at the time) plot details, had reviewers trying to describe a film without actually telling you what happens other than it’s fast, exciting, thrilling and very, very Star Wars-y and after seeing it you can tell why. We would all gone in to the cinema thinking we had paid for a ticket to a remake of the first trilogy. I’d have still paid it to be fair, but the corporate powers that be were no doubt worried as, there is a certain sense of deja vu to proceedings. Stop me if you’ve heard this one…

On a desolate desert planet, a youngster eeks out a living in relative anonymity. That is until the day that a cute and loveable droid appears who is linked to some intergalactic civil war and has escaped a precarious situation. Inside the droid you see are some top secret plans that are wanted by both the good guys and the baddies. Youngster and droid become embroiled in said war and run in to a rogue-ish smuggler and his woolly side kick which leads to them joining the plucky rag tag resistance against the might of the big and bad Empire … sorry First Order. So bad are they that they have developed a space station so powerful that it can destroy whole planets and … well, you get the picture … Reading through this adaptation then feels, somewhat like an extended highlights package of the two hour thrills and spills fest that was the film. Sort of like a Match of the Day for the movie. Characters and adventures come and go, flying by at a pretty breathless pace which does create an exhilarating  level of excitement but has the effect of not really letting the big emotional moments have the same wallop as they maybe deserve. As we all know as well, there is a very big emotional moment towards the end. Characterisation is at a minimum as a result and I can’t help but feel that too much of the plot is sidelined in favour of action and moving the story forward. The book needs to have been twice as big to be honest.

Talking of characters, one of the new addition to the galaxy far, far away is top X-Wing pilot Poe Dameron. A sort of Wedge Antilles for the new trilogy. So popular was Poe, that he’s been wazzing about and getting in to all manner of scrapes in his own monthly title which spins the tale of how he arrived at the situation we find him in as The Force Awakens opens in Lor Tan Sekka’s hut. This scene is granted a mere three pages in the adaptation mentioned above(!) which doesn’t really do it justice as the menace and ruthlessness of Kylo Ren and his crack unit of storm troopers is not fully realised and neither is Finn’s pang of conscience as the storm trooper for who storm trooping is not the life.

Up to Volume 3 now, Poe Dameron has been locked in a permanent battle of wits with Terex, a sort of intergalactic criminal cum First Order enforcer. A Tarkin like figure who is ruthlessly pursuing our hero and his Black Squadron across the galaxy via subterranean egg worshipping cults, prison planets and Hutt double crossing. The opening salvos of this series showed promise but were pretty standard fare … get in to scrapes from which escape looks impossible and then get out of them by the skin of your teeth …  but now, as Legend Lost arrives there’s far more to admire. The artwork is great, most realistic and less “cartoony” than The Force Awakens, and we are treated to far more characterisation this time out. Poe’s smart arse fly boy persona is of course, already sorted, but mourning the death of a comrade and the sad task of seeking out another who has turned traitor adds a much needed emotional heft to proceedings. Throw in a new character, the willowy Avatar like alien journalist Suralinda Javos, and send her off on a mission with the untrusting and suspicious lasses of Black Squadron and we have a really busy narrative which whizzes along and pretty soon gets to the action. There’s a heavy emphasis on female characters that seems prevalent in this new Star Wars universe and The First Order get in on the act with the one eyed, alpha female, Isla She Wolf like Commander Malarus holding Terex’s leash and that’s before I even mention a certain Alderanian Princess and silver Stormtrooper … yep, this is the new Star Wars and it’s great. This title is really picking up the pace and I’m sticking around. Marv Gadgie