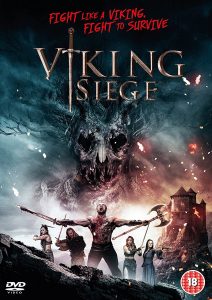 Whilst it never quite lives up to the ‘Vikings meets Evil Dead’ tagline splattered optimistically across the press release, Viking Siege is damn decent as low budget horrors go, primarily because it doesn’t take itself too seriously and wisely plays to its strengths, rather than over-stretching itself. With its claustrophobic setting, alternating between the food hall and the cellar of a monastery, the film is carried by a game cast and plenty of gratuitous gore. Although on the subject of effects, whilst the wounds and blood are all handled convincingly, it has to be said that the ‘tree monsters’ are a bit naff, basically blokes in masks and all a bit ‘bargain basement Doctor Who’, which is a shame, because if those creatures were actually scary, that ‘Vikings meets Evil Dead’ blurb would almost ring true.

Plot-wise there’s not a lot of existentialism, just scantily-clad babes on a rampage for vengeance and slaughtering the drunken monks who sold their families into slavery, and the aforementioned tree things may or may not have something to do with the meteorite that falls to Earth in the opening credits. It matters little either way though, because Jack Burton keeps everything tightly wound and moving along at a quick enough lick that you simply don’t have time to stop and pick holes in the plot. Apparently his directorial debut, he could be a force to reckon with if someone gives him a few more quid to play with. Ian Glasper