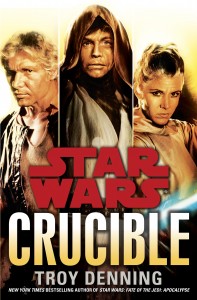 Star Wars Legends: Crucible – Troy Denning (Arrow Books)
Star Wars is one of the most constant IPs out there and has been for nearly forty years and is still going strong. The series is about to get an even bigger boost to its already galaxy-stretching fan base with the announcement and release of a new trilogy (pray it will be better than the prequels) being released this Christmas. The fact the original cast is returning to reprise their iconic roles is more exciting than anything else. That’s why I thought it fitting to take a look at Star Wars Legends: Crucibles.
This tale, from a galaxy far far away, returns to Luke Skywalker’s (now Grandmaster of the blossoming Jedi Order) and Han and Leia Solo’s quest to stop anything untoward happening in their cosy corner of the galaxy. Unfortunately, pirate actions have been causing their long-time friend, Lando Calrissian, a lot of bother with, as all good Star Wars stories do, a healthy dollop of Sith and Dark Side activity on the side. The characters are suitably aged from the original trilogy, each having a selection of Jedi offspring and their own backstories – covered in other books contained in this extensive novelised universe. Lando’s troubles are only the start of this space hopping adventure. The Columi play the parts of suitably sinister antagonists with enough flaws and character themselves to make the parts of the story, when you follow their misadventures, endearing and as enjoyable as when you are following the protagonists; what is their endgame? Why are they so desperate for Lando’s stake in the mining consortiums? These questions keep you hooked throughout the three-hundredish pages of the novel.
…This is the point I would like to place a stop to clarify something, take an aside so to speak…
The timeline for these books is massive – easily one hundred individual novels…but they are no longer canon as of the new films. Yes, any books prior to the original trilogy may still stand but anything set afterwards is now being discarded for the new films (Chewbacca being back in the new films and deceased in the novels etc.). But that is by no means a reason to disregard these amazing stories that potentially capture these legendary characters better than the new films may.
Aside over…
Troy Denning has captured the main characters amazingly he gave my imagination an amazing and loyal backdrop to tell this story in vivid detail. Having Luke Skywalker and the Solos taking the forefront in a new Star Wars story is refreshing as they have taken a backseat/cameo role in a lot of the more recent books. Han is his typical cocky self but having insights into his thought processes and emotions really adds another dimension to these characters I have loved since childhood. Their interactions with each other are reminiscent of the films with lots of back and fore repartee and nods back to the original trilogy. The support cast can be a little weak at times but they serve their part as story transfers and are suitably fleshed out for purpose, most of the time.
The plot moves on at a breakneck pace that spans many planets, stations and ships. Everything seems logically thought out and there are no random jaunts in the plot. There are enough space battles and the unfortunate fate of a planet is handled with such detail and immediacy that I couldn’t put the book down. Considering how expansive this story is, it is very well constructed and you’ll be very happy with the subsequent conclusion. Another point of note is the fact that this addition is not as jargon heavy as other entries into the series. This makes it a great jumping in point for those who loved the films but are intimidated about where to start in this lengthy series.
The only disappointing part of this book is the fact that this tale might not ever be canon again but do not let this stop you from reading this amazing addition to the Star Wars universe. You will be doing yourself a disservice if you don’t experience this Force heavy space adventure. Kyle Olsen