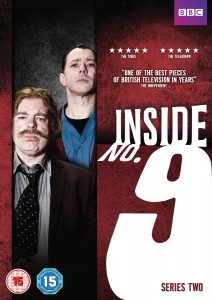 Inside No.9 – Series 2 DVD (BBC DVD)
Hush now, stop prattling, come on in, close the door and draw the curtains; its story time. Time for another tale or two (well, six actually) from the darkest reaches of the fevered imaginations of Steve Pemberton and Reece Shearsmith, so gather round boys and girls and welcome to the second series of the weird and wonderful ‘Inside No.9’.

I loved the first series of ‘Inside No.9’. The idea of different dramas, linked only by the fact that each takes place inside an a dwelling bearing the number nine appealed to my inner portmanteau fiend; the same fiend that dwells within the souls of generations of horror and strange fiction fanatics raised on a televisual diet of ‘Tales of The Unexpected’, ‘The Twilight Zone’, ‘Play for Today’, ‘Ripping Yarns’ and the cinematic delights produced by the fiendish Amicus’ studios, the DNA of which is woven through every glorious strand of this show.

This second series delivers exactly what I hoped it would and doesn’t deviate from the blueprint laid down by the first series; serving up six dark fables, each built on a foundation of woe, each possessing a surprise sting in its tail that infects your psyche, ensuring that it lives there long after the final credits have rolled on each chapter. Crammed with dark humour, tragedy, pathos and horror, the subject matter of ‘Inside No.9’ (much as its dramatic forbears and predecessors did) varies wildly from feuding witch hunters fighting over the fate of the accused, the erosion of a family as their secrets come tumbling out at a party, life’s final moments and the acceptance of such, a far from traditional and blackly comic take on that most cherished home grown institutions, the murder mystery or good fashioned horror stories and shockers that centre on revenge in a Samaritan’s style call centre and the other-worldly terrors and supernatural chills that turn their charms on a cheap, pranks the public horror show and each episode is involving, enthralling and entertaining and, draws you into events in a way in which few modern shows can. It’s an ode to a bygone era of television, updated and reinvented for the twenty first century and it’s clever, incredibly well-written and enacted and still remains, I’m happy to say, one of the best shows in the BBC’s canon. Bravo, Messer’s Shearsmith and Pemberton, bravo. Encore, encore… Tim Mass Movement