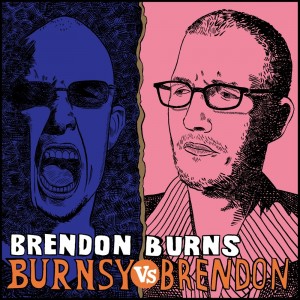 Brendon Burns – Burnsy vs. Brendon 2xLP (Palm Reader Records)
At some point in your life, you’ll wake up one morning and realise that every decision you’ve ever made has led you to where you are. And at the moment, you can either carry on, blindly trusting that fate or the Universe will continue to put you in the right place at the right time or the wrong place at the wrong time (depending on how you view such things), or you can change direction, get off the path that you’re on and make a determined effort to take a new road and become the person you always wanted to, and knew you could and should, be. While it may sound like a lot of old touchy-feely hippie crap, it happens to all of us and whether it’s arrival is pre-empted by a work crisis, a relationship breaking down, the death of a family member or friend, or some other life changing experience; each and every one us will fall victim to that moment of self-realization and deal with it in our own inimitable way. Which is where, or somewhere similar, I suspect Brendon Burns found himself before, during and after performing this ferociously intelligent, incredibly funny, emotionally scarring and brutally honest show.

For those of you who don’t know, ‘Burnsy’ was Brendon’s stage persona for more than a decade, the part of him who could say, do and be all the things that Brendon wanted – but chose not – to be, letting ‘Burnsy’ do the talking instead. But the problem with Burnsy was that Brendon forgot where he began, and his alter-ego ended, and somewhere along the way, the two became hopelessly entwined. ‘Burnsy vs. Brendon’ is the first part of him coming to terms with that; the first showdown between Viktor and his monster if you will. It’s a show in three acts, with the acerbic, razor sharp Burnsy leading the charge, venting his spleen about his homeland and it’s ills, societies perception of serial killers and their partners and the Middle East. It’s offensive, straight to the point, clever and hilarious in equal measure, and just as he finishes, Brendon – and the middle act – begins. Calmer, more carefully considered and far more personal, it’s here that Brendon Burns opens up to his audience and allows them a glimpse of the things that have brought him to this point as he dissects the political establishment, relationships and his own life in a viciously astute, smart and ball achingly hysterical set that’s every bit as offensive as his “twin’s” performance, but thrives more on observation than rage. And then comes the final act, in which Burnsy and Brendon come into direct conflict, and even though it overflows with humour, it’s also (by design I should add), a cathartic roller-coaster, as both sides of his personality vie for control of his soul as he struggles to try and remove himself from the chains of his past and become the man that he wants to be. It’s a powerful, and at times, incredibly uncomfortable, but fitting finale to the show.

This isn’t the “populist” crack-a-joke-a-minute-laugh-along-with-the-family comfortable comedy patented by Peter Kay and Michael McIntyre that’s designed to appeal to morons. No folks, ‘Burnsy Vs Brendon’ is about as far from that tired, hackneyed drivel as it’s possible to get. This is raw human drama, biting social observation and irony, carefully crafted from the same school of thought as Lenny Bruce, George Carlin and Richard Pryor, but far more relevant to a modern audience, it’s pain made real and anger made flesh, and reflects the innermost workings and musings of its architects being. And it’s absolutely fucking brilliant… Tim Mass Movement